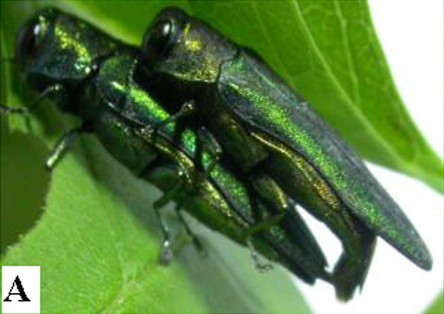 The emerald ash borer (Agrilus planipennis) is a green beetle native to Asia and Eastern Russia.[2] Outside its native region, the emerald ash borer (also referred to as EAB) is an invasive species, and emerald ash borer infestation is highly destructive to ash trees in its introduced range.[/caption]Guildwood Park Residents Attempt To Stop City From Cutting Down Trees

According to an article recently published by Global News, residents of Toronto's Guildwood Village are attempting to stop city authorities from cutting down trees in the nearby Guildwood Park.

Guildwood Park is a very old and dense forest which has recently been devastated due to an infestation of the emerald ash borer. The infestation has cost the city (not to mention its tax paying citizens) many thousands of dollars, as it has had to foot the bill for cutting down hundreds of trees in the forest. Evidence of this deforestation, from piles of rotten logs to scarred, dead branches, can be viewed all through the area of the park.

Unfortunately, in its haste to complete the project, the city also inadvertently authorized the cutting down of many healthy trees along with the ones which were infected. As a result, many citizens of Guild Village have come together to protest the move by the city to proceed with its wholesale clearing out of many large sections of the park.

Patricia Spindel, who represents Save The Guild, a newly formed protest group, had this to say: “It’s very emotional for people here. The bureaucrats said they have to do it but they didn’t have to do it all at once. And they didn't have to knock down all the healthy trees. They could do it in sections.”


the bite-sized pests are also causing a million-dollar problem for the city of Montreal.

City of Montreal officials say that roughly 200 trees on the island are currently infested.

In the borough of Côte-des-Neiges—Notre-Dame-de-Grâce, 75 trees have already been cut down.

“The emerald ash borer knows no borders … It’s attacking all our trees. We believe a concerted plan must be put in effect right away. There’s no point in waiting. It is here and it is killing trees right now,” said Côte-des-Neiges—NDG councillor Peter McQueen, adding that the summer months will be more uncomfortable with fewer trees in the neighbourhood.

"Property values will fall, air conditioning costs will go up and during heat waves even more people — elderly people, vulnerable people with respiratory problems — will pass away during those heat waves if we lose more trees.

The emerald ash borer is a beetle whose species originated in Southeastern Asia. How the beetle managed to arrive on the North American continent is still a mystery, but its actions since finding its way to this part of the world have caused a major uproar. The beetle is believed to be responsible for the infestation of millions of trees on the continent. Measures to undo its harmful effects are ongoing and, as witnessed in Guild Village, remain highly controversial. The Emerald Ash Borer was first discovered in America in June 2002 in Michigan. It is believed to have been brought to America unintentionally in ash wood which was used to stabilize crates during shipping.[/caption]

Residents try to stop city from cutting down trees in Guildwood Park
http://globalnews.ca/news/1228176/residents-try-to-stop-city-from-cutting-down-trees-in-guildwood-park/