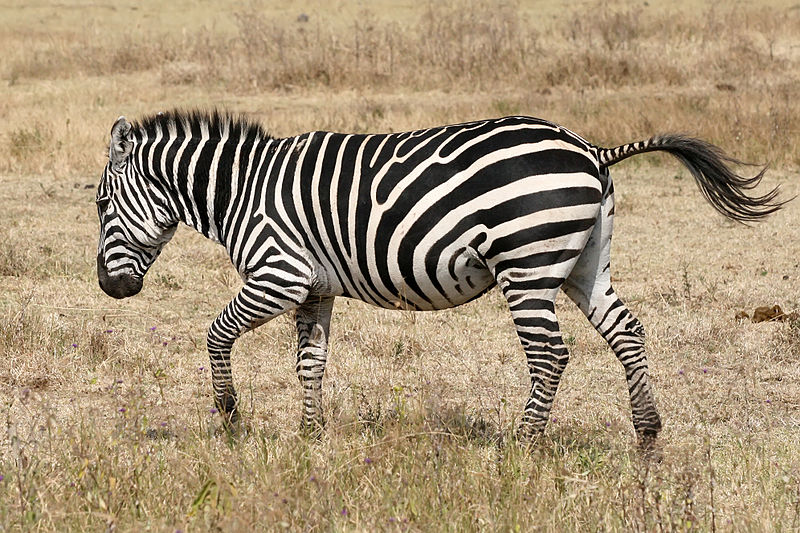 Scientists Solve Mystery of Why Zebras Have Stripes
Muhammad Mahdi Karim[/caption]There have been various suggestions put forth as to why zebras have black and white stripes. Some have suggested the alternating stripes were mechanism to cool off against intense African heat. Others have suggested the patterns might confound predators or even ward them off. Now, a team of scientists believe they have cracked the mystery and published their findings in the scientific journal "Nature Communications" which was released on April 1.

The answer to the question is simple, but took painstaking efforts to prove. Zebras have stripes to ward off the African biting fly and other types of ectoparasites. Researchers first created a geographical map of all forms of zebras which currently exist in the old world. There exist seven main species of asses, zebras, and horses which are further divided into 20 subspecies. The difference in striping patterns were also carefully noted. Next, the researchers geographically mapped their known predators, which are chiefly hyenas and lions. Their map also included temperatures, forests, and flies.

After examining the distribution patterns in their various maps, the scientists found that zebras live in a wide geographical area which curiously overlapped with the areas biting flies are known to inhabit. On the flip side, the geographical areas inhabited by zebras did not support any of other theories offered for why the zebras would have evolved with stripes. The further the researcher dug into their analysis of ectoparasites and the areas where their population is denser, the more they found striped animals living in those areas.

"I was amazed by our results," said lead author Tim Caro, a wildlife biologist at the University of California-Davis. "Again and again, there was greater striping on areas of the body in those parts of the world where there was more annoyance from biting flies."

Now that they have cracked the age old mystery as to why zebras have stripes, they will turn their attention on to exactly why does stripes ward off biting flies. It would be interesting to see if similarly patterned safari clothing could be developed to allow humans to tap into that biting fly defense mechanism. Zebra patterning is a feature found on some prosumer and most professional video cameras to aid in correct exposure. When enabled, areas of the image over a certain threshold are filled with a striped or cross-hatch pattern. Often, two thresholds are available: 70% and 100%. The former is useful for correctly exposing skin tones, while the latter is used to ensure overall scene exposure is correct.
[/caption]
Source:
Scientists Solve Mystery of Why Zebras Have Stripes
http://www.csmonitor.com/Science/2014/0401/Why-do-zebras-have-stripes-New-research-offers-answer.-video

Former Letter of Complaint by Ex-Beatle John Lennon Sells for £53,000