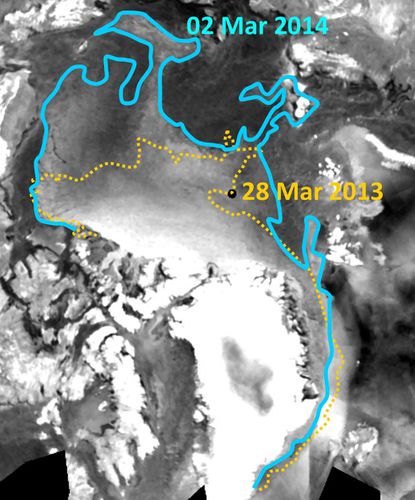 Source: NSIDC
A NASA Blue Marble view of Arctic sea ice on March 21, 2014. Arctic sea ice reached its maximum extent for the year on March 21 at 14.91 million square kilometers (5.76 million square miles), making it the fifth lowest maximum in the satellite record.[/caption]The extent or maximum area for the Arctic Sea Ice cap is officially measured this time of year. It is a way to gauge the size of the ice cap and detect trends. Scientists are saying that the extent recently recorded is the fifth smallest one according to their records. Annual measurements of the Arctic Sea extent have been taken since 1978 with the smallest measurement being made in 2011.

Which means that while this year's measurement is small when compared to measurements taken over the past 36 years, it is an increase over 2011. However, the benchmark average taken of the period of 1978 to 2010, indicates the size is well below the average. Officially, the size is 5.7 million square miles. The extent needed to be an additional 288,000 square miles in order to meet the historical average.

Scientists say that with the smaller extents being recorded, there are risks to the planet. The additional water can alter the circulation patterns of water in the ocean and affect the atmospheric circulation at least in the surrounding regions. However, the concern is that the resulting warmer waters may cause the Greenland Ice Sheet to melt. This would see a substantial amount of the greenhouse gas carbon dioxide being dumped into the atmosphere which might hasten a vicious cycle of global warming.

It should be noted that the science is limited in this field and there do not exists quality models to predict what effect, if any, the reduced size of the Arctic Sea Ice extent may pose. That's not to say scientists don't have models to make predictions about future sizes of the extents, but they produce very inaccurate results. For the most part, the amount of ice has been average. The reduced size of ice mainly affected the Sea of Okhotsk and the Barents Sea.