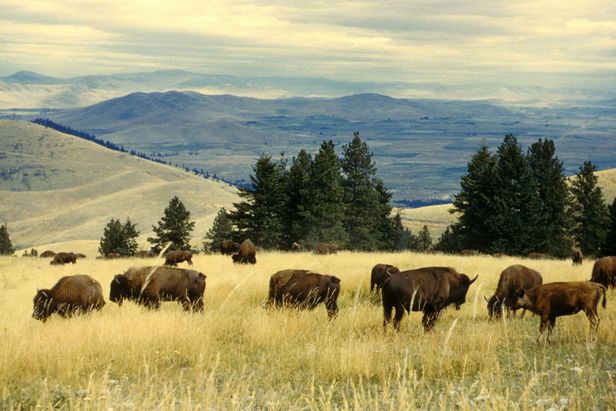 Bison Stampede at Yellowstone Turns Viral and Speculative (VIa Wiki Commons)[/caption]Sociologists and behavioral analysts love the Internet, particularly when viral videos unleash excitement and wild speculation. Such was the case earlier in late March, when an earthquake was felt throughout Yellowstone National Park. The movement registered a magnitude of 4.8 on the Richter scale, and its epicenter was nervously close to the massive Yellowstone Caldera.

Significant earthquakes have not been felt at Yellowstone since the 1980s, a time when real-time Internet video was still more than a decade away. After the March 30th Yellowstone earthquake, however, videos of large bison running away from the Yellowstone Caldera have fueled speculation that the bovids may have been fleeing a potential eruption.

The Yellowstone Caldera is one of the world's most impressive natural wonders. It is a supervolcano, which means that it holds enough energy to cause destruction on a continental scale. In fact, a single eruption of the Yellowstone Caldera could settle the climate change debate once and for all since it would essentially bring significant cooling to the surface of the Earth after years of constant and massive ash and sulfur columns.

Popular belief of wildlife being closely attuned to seismic and volcanic events has prompted people to ponder on the recently filmed bison stampedes at Yellowstone. Some people think that the earthquake may be a sign of the Yellowstone Caldera awakening, and that the bovines fleeing the general area of the National Park are reacting to a future eruption.

Geologists and other Earth scientists, however, do not see the bison stampedes or even the recent seismic activity as being indicative of an impending eruption of the Yellowstone Caldera. Park visitors who enjoy the hot springs and geysers should not scramble like bison to find refuge at this point. Bison stampede for many reasons, not just because they think an eruption is imminent.

According to Yellowstone spokesman Dan Hottle, “Those bison are running because that’s what they do every day in Yellowstone.”

Al Nash, another spokesman for Yellowstone National Park, added: “We have heard about some pretty wild rumors – including one concerning the animals.

“We do have bison, elk and other animals that have moved outside the park recently, but they’re doing that because we’re in the depths of winter and food is a little hard to find in places.

“At this time of year, they tend to migrate to lower elevations where they think there might be something to eat that’s easier to get at. When the snow melts off and things start to green up, those very same animals will walk right back into the park.”

Yellowstone Bison Running for their lives. Big erruption next?
http://www.disclose.tv/action/viewvideo/170574/Yellowstone_Bison_Running_for_their_lives_Big_erruption_next/#ixzz2y2ckZDBb

Why Did Google’s Nest Smoke Alarm Get Pulled?