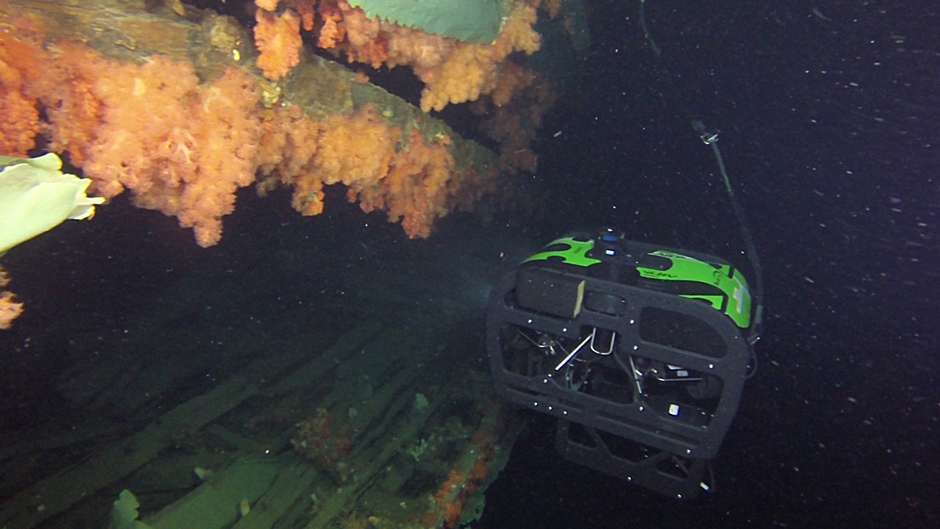 A remote operated vehicle (ROV) operated by Canadian Armed Forces personnel takes a video of the Breadalbane's stern. The Breadalbane sank in 1853[/caption]

On October 22, 1853 William H Fawkner gave a chilling eyewitness account to Illustrated London News. He recounted watching the harrowing loss of a Scottish merchant ship to the unforgiving ice of the northern Arctic. Breadalbane, a three-mastedbarque, was en-route to deliver supplies to Sir Edward Belcher when the ship when the ship was assailed by large chunks of moving ice. The ship's crew of 21 all escaped the perilous wreck, but the ship was lost to the frigid waters in a matter of minutes.

Both the ships tragic end and its more recent discovery by Joseph B MacInnis in 1980 are well documented endeavors. However, advances in technology have brought us ever closer to reliving that ill-fated night in the Barrow Straight. A joint effort was undertaken by Canadian Armed Forces, Parks Canada, and SeaBotix Inc to shine bold new light on one of Canada's most interesting National Historic Sights. "Operation NUNALIVUT involves the Royal Canadian Navy, the Royal Canadian Air Force and the Canadian Army, as well as our many community, Allied and Governmental partners; it's a real-life example of how Team North can come together to work successfully in an environment that few have had the privilege to experience. The Whole of Government cooperation required to capture this footage of the Breadalbane is truly commendable." Lieutenant-Colonel John St. Dennis, Task Force NUNALIVUT Commanding Officer. Armed with SeaBiotix's advanced remote operated vehicles (ROV) and new HD cameras, Canadian Naval divers toiled an estimated 100 meters under the ice for six long days, and have resurfaced with breathtaking new footage of the ship. The captivating imagery shows just how well the ship has been preserved, and the teams hope that the newly collected data will lead to greater insight into the ship's past. No information has yet to be released as to whether or not the data has in fact been helpful, but Senior Underwater Archaeologist for Parks Canada Jonathan Moore stated in a press release, "We've learned a huge amount...it's rare to have such a detailed view of a shipwreck from 1853."