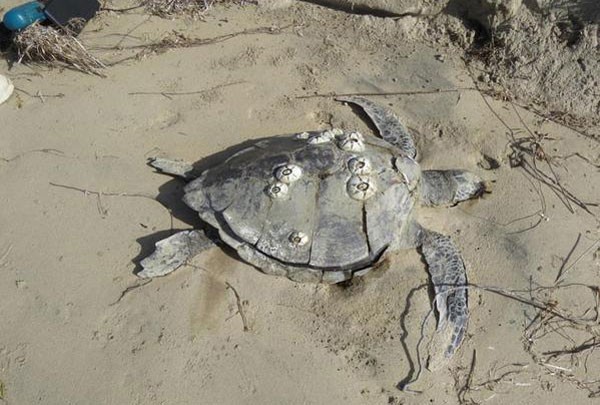 150 Sea Turtles Found Dead In A Lagoon Of Mexico[/caption]Cold temperatures are suspected of killing some 150 sea turtles found in a lagoon of Mexico's Baja California Peninsula.

According to Mexico News Daily, investigators with the federal environmental protection agency said Saturday the green sea turtles were found in the Ojo de Liebre lagoon, on the Pacific side of Baja California Sur state. The agency said it would be difficult to determine the exact cause of death due to the advanced state of decomposition of the remains.

The agency said a cold front that lowered temperatures in the region may have caused the deaths but investigators also would try to determine whether some sort of contamination might have played a role.

Green sea turtles move across three habitat types, depending on their life stage. They lay eggs on beaches. Mature turtles spend most of their time in shallow, coastal waters with lush seagrass beds. Adults frequent inshore bays, lagoons and shoals with lush seagrass meadows. Entire generations often migrate between one pair of feeding and nesting areas

It was the third time this year that dead marine life has been encountered in the area. On January 13, 14 dead gray whales were found but their deaths were not considered out of the ordinary in comparison with other years.

The Lessons Learned From The Egg That Scientists Unboiled