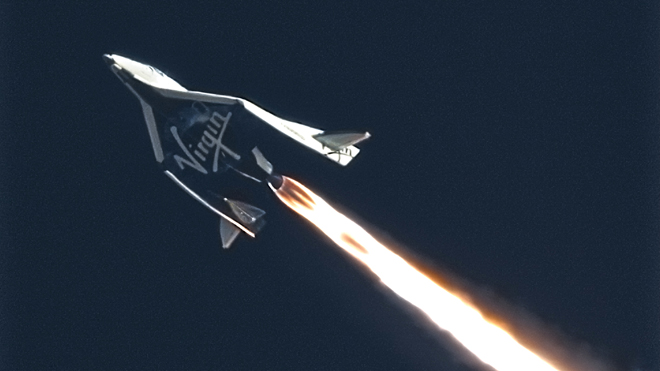 Virgin Galactic's latest plane called "Spaceship 2" or SS2 has set a new altitude record for flight by an airplane when it soared to 69,000 feet above the earth. Put another way, the plane rose to a height of just over 13 miles or 2.37 times the height of Mount Everest. That wasn't the only news generated by SS2, it also deployed a technology known as feathering for the first time as part of a planes technical profile. The special technique allows the wings of a plane to rotate up to 65 degrees making it behave similar to the high-drag projectile known as a shuttlecock. This is how the plane was able to slow down as it reentered the atmosphere.

“2014 will be the year when we will finally put our beautiful spaceship in her natural environment of space,” said Sir Richard Branson in a statement about the successful test flight. “Today, we had our own Chief Pilot flying another flawless supersonic flight and proving the various systems required to take us safely to space, as well as providing the very best experience while we’re up there.” The success of SS2 means it will be ready for commercial flights starting later this year. Virgin Galactic is now poised to offer customers suborbital space flights. It should be noted that suborbital flights are not those which venture out into the deep of outer space as those require rocket engines at this time. However, suborbital flights do reach space and will give patrons a unique experience. While 13 miles above the surface of the earth is high, any distance up to 62 miles above the earth is also considered suborbital.

“Today’s flight was another resounding success,” said Virgin Galactic CEO George Whitesides. “With each flight test, we are progressively closer to our target of starting commercial service in 2014.”

Related Topics:spaceshiptwo breaks record
Up Next

Another Canadian Makes 1,000 Person Shortlist for Trip to Mars