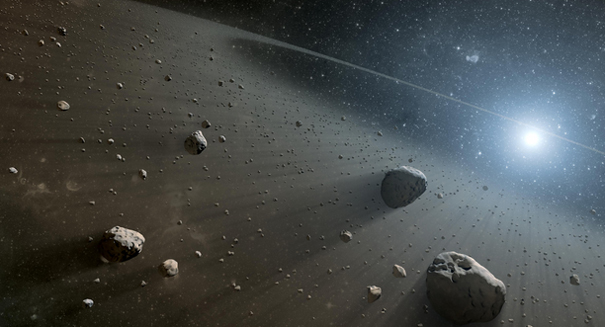 Most people are probably familiar with the amazing photos of our universe that the Hubble Space Telescope provides us with, but the primary purpose of the Hubble is to provide scientists with new data about how the universe functions and perhaps even discover how it was initially formed. Hubble is almost 24 years old, and in that time it has revealed many new facts about our universe - something it still continues to do today.

Most recently, the telescope was ordered by ground controllers to focus in on a specific asteroid within our solar system's asteroid belt. Scientists on the ground believed that the rock was beginning to break apart, and when Hubble was turned to the object, it turned out those suspicions were well-founded.

Even though they expected the asteroid to be breaking up due to other data, scientists still have no idea why it is doing so. The asteroid has not passed near enough to any celestial bodies to be affected by tidal stresses of any sort - and an asteroid is basically just a giant rock, so watching one just crumble is a bit strange. Nevertheless, discovering new phenomena is the first step towards explaining them.

“The pieces were not all ejected at a single origin time suggesting that disruption by asteroid-asteroid impact is not the likely cause. Water ice sublimates weakly on R3, producing gas pressures that are too small even to fracture a pile of talcum powder. It is unlikely that ice sublimation is responsible for cracking the asteroid,” said David Jewitt, as the University of California, Los Angeles.

Related Topics:Hubble detects rare asteroid break up
Up Next