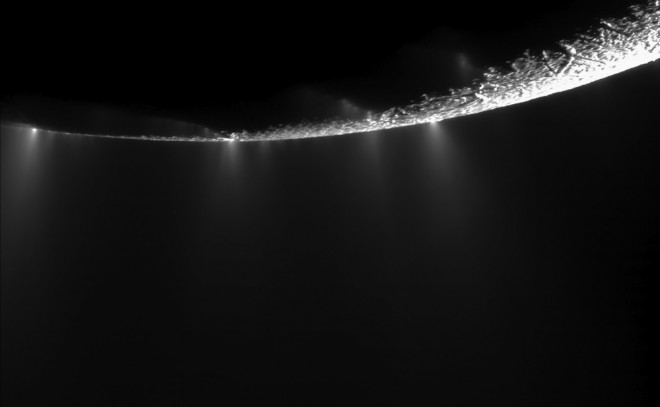 NASA has confirmed that the space probe Cassini, which has been orbiting Saturn and its many moons for the past decade, has captured evidence they believe proves the existence of an ocean deep inside the Enceladus moon. What is significant is that the ocean may be capable of supporting life. It should be noted that thus far, not even the smallest form of life has been discovered anywhere beyond our planet.[/caption]

This ocean won't be easy to get to as it is as it runs beneath a surface of ice that is between 24 and 39 kilometers (16 to 24 miles) deep. In 2005, early into the Cassini probe's exploration, it captured photographs of water vapor shooting out from a point along Enceladus.

The new data provide the first geophysical measurements of the internal structure of Enceladus, consistent with the existence of a hidden ocean inside the moon. Findings from the gravity measurements are in the Friday, April 4 edition of the journal Science.
Ocean Inside Saturn's Moon Enceladus Gravity measurements by NASA's Cassini spacecraft and Deep Space Network suggest that Saturn's moon Enceladus, which has jets of water vapor and ice gushing from its south pole, also harbors a large interior ocean beneath an ice shell, as this illustration depicts.

"The way we deduce gravity variations is a concept in physics called the Doppler Effect, the same principle used with a speed-measuring radar gun," said Sami Asmar of NASA's Jet Propulsion Laboratory in Pasadena, Calif., a coauthor of the paper. "As the spacecraft flies by Enceladus, its velocity is perturbed by an amount that depends on variations in the gravity field that we're trying to measure. We see the change in velocity as a change in radio frequency, received at our ground stations here all the way across the solar system."

The images were reported to be stunning. Enceladus is estimated to be 483 km (300 miles) wide.

The ocean is believed to be at least as big as Lake Superior, according to research published this week in the journal Science.

It is colloquially referred to as "tiger stripes" and has numerous fissures along the ice covering. The water vapor was escaping from one of those cracks. At the time, scientists believed that a water reserve might be the root cause of the water vapor releases. Now, the science further supports that theory.

NASA says that it detected what are called gravitational anomalies which revealed the size of the body of underground water. They claim is may rival Lake Superior in size and is sufficiently warm to avoid freezing over. As for how a body of water so far removed from the warmth of the sun and deep below the surface can stay warm, chalk it up to gravity. The pull coming from both Saturn and its many moons keeps the water in motion and with the motion comes friction and heat. At least sufficient for the water to avoid freezing and perhaps enough to support some form of life.

The prospect of liquid water, particularly water that comes close enough to rock to leach out minerals, raises the likelihood that Enceladus has chemistry suitable for life, planetary scientist Jonathan Lunine with Cornell University told reporters on a conference call on Wednesday.

"The interior of Enceladus is a very attractive potential place to look for life," Lunine said.

Scientists are working on follow-on missions proposed for both Enceladus and Europa.

"I don't know which of the two is going to be more likely to have life. It might be both. It could be neither. I think what this discovery tells us is that we just need to be more aggressive in getting the next generation of spacecraft both to Europa and to the Saturn system once the Cassini mission is over," Lunine said. The mighty jets of Enceladus appear in this image, taken by Cassini as it flew over the moon’s south pole. Image: NASA/JPL-Caltech/Space Science Institute[/caption]

Source:
Ocean that could support life found deep under the icy surface of Saturn's moon
http://www.telegraph.co.uk/science/space/10743375/Ocean-that-could-support-life-found-deep-under-the-icy-surface-of-Saturns-moon.html

Is There An Ocean On One Of Saturn’s Moons?

Moon may be 4.5 billion Years old According to New Research