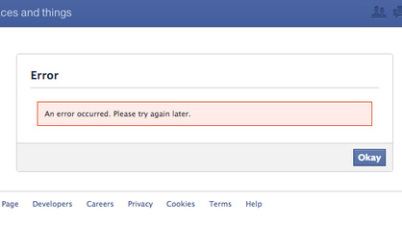 Facebook Takes Over The Internet
[/caption]Facebook temporarily took over the Internet on February 7. An issue involving third party log-in applications redirected users to Facebook.com instead.

According to various reports, for approximately twelve minutes, users attempting to connect to the social network via Instagram, Skype, and several other medias were directed to an error page on Facebook. Facebook released a short statement regarding the incident.

"For a short period of time, there was a bug that redirected people from third party sites with Facebook Login to Facebook.com. The issue was quickly resolved."

One news source reported the incident as occurring in the late afternoon with only those attempting to log-in using the widget as affected. Another source says that the incident occurred in the late evening and everyone already logged in using a Facebook widget, including users logged into sites such as CNN, were re-directed to Facebook.com instead.

The use of widgets as centralized identification is very widespread on the Internet and the Facebook re-direction incident has left many wondering how easily the Internet could be "taken over."