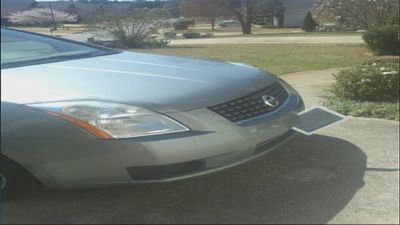 Roswell, GA - Alexa Crisa returned home from work this past Friday and parked her car in the driveway. Later in the evening, when her father returned home he inquired of her as to why there was an Apple I-Pad stuck in her front bumper. It was then that Crisa came out to inspect her car and sure enough: there was a beautiful Apple I-Pad stuck in her front bumper, reports WSBTV.

It should be understood that the item in question was stuck "in" her bumper like a martial arts circular knife. It was then that Alexa recalled a driver ahead of her had sped into his subdivision causing an object to hurl from the roof of his car towards her car.

As Ubergizmo explains, the iPad apparently "flew off the moving car’s roof before it hit [Crisa's] bumper ... at the right angle and velocity to plant itself within firmly, just like how barnacles like to cling to the side of a ship."

She thought nothing of it at the time because she neither saw what it was nor heard an impact. The I-Pad screen was badly cracked but not so much that Alexa wasn't able to power it up and find its rightful owner - after prying it loose with a hammer that is.

She recorded the flying I-Pad stuck to her car and posted the video on her Facebook page. The video went viral with 1.5 million hits.