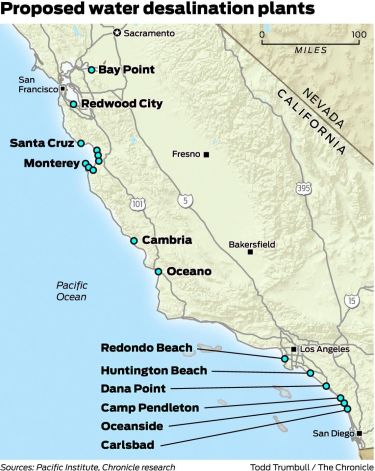 Currently, California is starting to experience a potentially long-term drought. Various cities have invested over $1.0 billion into desalination tech. Desalination plants draw water from the ocean and remove the salt from the water. From there, cities can use the water locally or ship it elsewhere. Such a process costs a lot of money but might prove more than necessary for much of the state.

Northern California features a decent supply of natural bodies of water. However, Souther California often imports its water from elsewhere. Desalination projects are underway in Los Angeles and San Diego at various sites. Cities continue to invest in this technology in order to avoid a mega drought in the near future. Otherwise, these cities would have to importing water from other locations, which is cost-prohibitive long-term.

In the end, desalination is still more costly than importing water, but costs continue to decrease. A desalination operation might soon cost less for California than water imports. The state needs to attack its water shortage problem with persistence in order to avoid even further problems. Throughout the 20th century, the state has been plagued by terrible droughts. California is now actively trying to avoid that same development during the 21st century.

Related Topics:california desalination tech
Up Next

Father Unable to Save Family in Fiery Crash