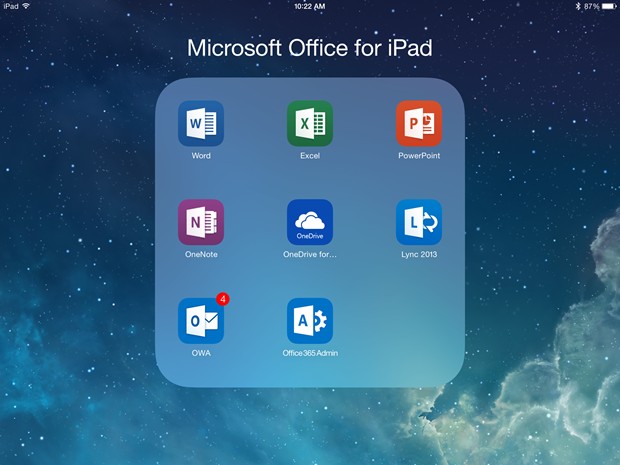 On March 27, Microsoft Corporation released its office document-processing suite, Microsoft Office, as apps for iPad through the iTunes Store.

Designed with cloud users in mind, this version of Office relies heavily on Office 365 online and requires a subscription to that service for full functionality or to use the suite on up to 5 devices.

In Office for iPad, you produce and edit your documents and then save to consumer or business OneDrive, Sharepoint or your iPad. Users don't get complete desktop PC or Mac Office functionality, but they do get many of the features needed to create and edit documents, spreadsheets and presentations, including a familiar-looking user interface. These apps also work with the iPad's voice dictation to provide hands-free drafting. Users can also use Apple AirPlay to present their creations via wireless.

Although the benefits to iPad users who have waited years for Microsoft Office are many, there are several things lacking with this release. Office for iPad includes Word, PowerPoint, Excel and OneNote apps, but there isn't an Access or equivalent database app. The iPad-compatible Office also does not give users the ability to insert videos in PowerPoint. In fact, the PowerPoint app appears to be optimized more for presentation display rather than presentation creation.

Printing is another area lacking in the service. You must save your documents and then print using another program or open them using the Office Web app and then print. Users who like Dropbox or Google Docs aren't given an option to save directly from Office for iPad to those services. Lastly, only iPaid users with iOS 7 or higher can take advantage of this release.

It's unknown at this time if in the future Microsoft will provide missing features or offer additional compatibility with other services.

On The Web:
Announcing the Office you love, now on the iPad
http://blogs.office.com/2014/03/27/announcing-the-office-you-love-now-on-the-ipad/
Microsoft Office for iPad sets the gold standard for tablet productivity
http://www.zdnet.com/microsoft-office-for-ipad-sets-the-gold-standard-for-tablet-productivity-7000027797/

Related Topics:Microsoft Office for iPad
Up Next