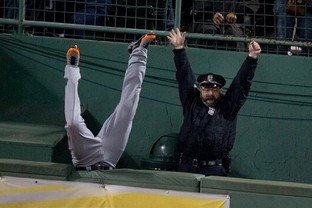 Boston police officer Steve Horgan lifts his arms in triumph as Torii Hunter of the Detroit Tigers tries and fails to catch a grand slam hit by David Ortiz of the Boston Red Sox in the eighth inning of Game Two of the American League Championship Series at Fenway Park on Oct. 13 in Boston.[/caption]

When Red Sox slugger David Ortiz belted a grand slam in game 2 of the American League Championship series, hundreds of thousands of Boston fans began celebrating. One fan in particular has managed to get more attention than most. Now Boston Bullpen cop Steve Horgan has become a symbol of a team that was so bad last year and so good in this one.

GIFs and small video clips are flying around the web, all showing Horgan with his arms raised to the sky in jubilation, as Detroit Tigers outfielder Torii Hunter goes over the wall in a vain attempt to catch the Ortiz blast.

After the video was seen by millions of baseball fans, social media was ablaze trying to find out who the police officer was. Horgan's boss, Superintendent Chief Daniel Linskey finally gave up the secret identity on his own Twitter account.

After the game, Horgan gave a couple of brief statements and said pretty much exactly what you would expect from a fan who witnessed something special. “I couldn’t even hear myself it was so loud,” Horgan said. “I can’t believe it. I don’t know what to think. I can’t believe it. It was an awesome feeling.”