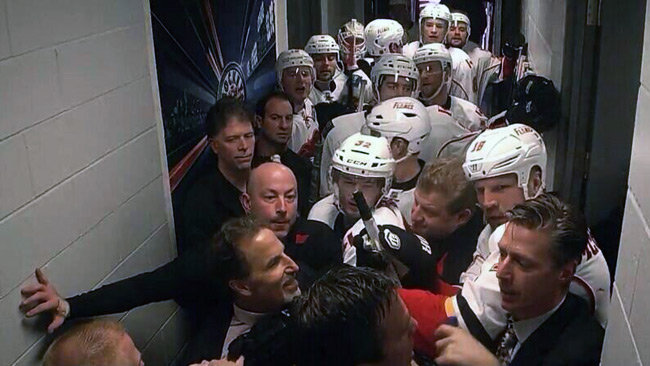 Vancouver, British Columbia - There must be some bad blood between the Vancouver Canucks and Calgary Flames because it took the blink of an eye after the puck was dropped for both teams to drop their gloves and go for a piece of each other.

It isn't really clear what sparked the din on the line, but what is clear is that referees handed out 152 penalty minutes, 8 game misconducts, and no less than 10 fighting majors. The whole mess didn't sit well with John Tortorella, head coach for the Canucks, whose behavior suggests that he blamed the visiting Flames for the melee that ensued. He was seen visibly angry as he followed the coaching staff for the Flames to their locker room at the end of the first period.

In the end, the game came down to a shootout and the Canucks prevailed on the strength of Chris Higgins' goal. In a post-game interview on TV station CKNW, Coach Tortorella laid the blame squarely on the Flames' head coach. Coach Tortorella believes that the starting lineup for the Flames was chosen in a way that made a conflict inevitable. Given that the match essentially opened up as a rumble, he was right in his assumption.