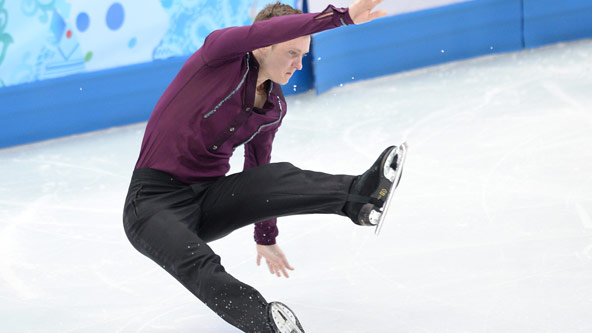 Jeremy Abbott falls to the wayside at Olympics team skating

It's an ill wind that doesn't blow somebody some good, they say. That may be the case with a horrible showing by Jeremy Abbot in figure skating that seems to have opened the door to fellow American skater Ashley Wagner.

The first competitions in the 2014 Sochi Olympic games came in team figure skating. Abbott has been an American champion. However, he also has a reputation for taking a fall in high-powered international competition due to nerves. His Thursday, Feb. 6 performance proved no exception. The Detroit Skating Club star hit the ice, literally, and took a fall resulting in a low score.

All is not lost for the Americans, however, as pairs skaters Marissa Castelli and Simon Shnapir put on a solid performance sending the U.S. team into a fifth place tie with France and Germany. They're nine points behind host Russia. Abbott and the pairs team were considered weak links on the team, though. The good news for Wagner is now she has an opportunity to step up and prove herself on the world stage. She finished a disappointing fourth last month at the U.S. championships, but was selected to the team anyway by U.S. Figure Skating officials.

How To Watch The Olympics Online: Bell Customers Now Have Options

liquids banned on flights to and from russia: TSA