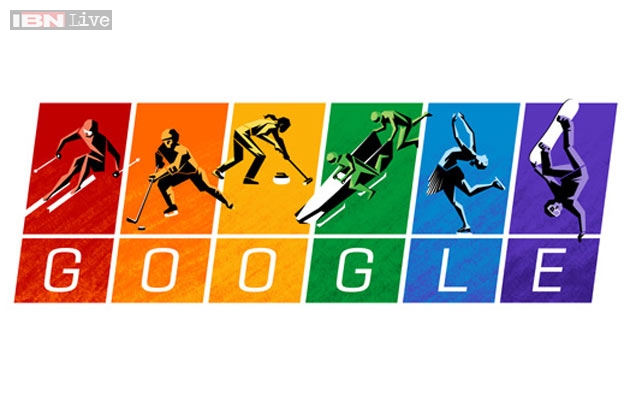 XXII Winter Olympics are set to begin and Google Inc. has made a statement with their google doodle on their search engine's splash page. The logo features each letter of the word Google in a different color. Inside each color bar are various silhouettes representing Olympic athletic sports for skiing, bob sledding, ice skating, snowboarding, male and female ice hockey.

The doodle linked to search results for "Olympic charter" and quoted from it: "The practice of sport is a human right. Every individual must have the possibility of practicing sport, without discrimination of any kind and in the Olympic spirit, which requires mutual understanding with a spirit of friendship, solidarity and fair play."

However, it is in the colors that Google is drawing attention. The colors are red, orange, yellow, green, blue, and purple. The color arrangement was well-chosen as it is the rainbow sequence used on the flags representing solidarity among gays, lesbian, bisexuals, and transgendered people. It is an open reminder to the hosting nation that all sports are for the benefit of all people without discrimination. Russia has been on an anti-gay crusade in an attempt to check what the government believes is the proliferation of the gay lifestyle and the concomitant corruption of Russia society.

Just last year, President Putin signed into law a Russian Orthodox-backed bill to criminalize the teaching of homosexual lifestyles in the presence of minors. The law applies to all adults including tourists. At issue is the fact that the Russian population is in steep decline and in desperate need of an increase in the birth rate. The Russian Orthodox Church, in their provincial mindset, blames the low birth rates among Russian woman on homosexual males and females. It ignores the fact that Russian woman have one of the highest rates of abortions per woman. Most Russian women have had multiple abortions during their lifetimes.

Thus far, it is too early to tell if the Russian anti-gay agenda will adversely impact the Olympic Games. Attendance is below expectation, but that might be attributed to security concerns in addition to their hardline against gay people.

Rockin’ Robin Deakin To Return To The Ring, Even After Losing 50 Fights

How To Watch The Olympics Online: Bell Customers Now Have Options