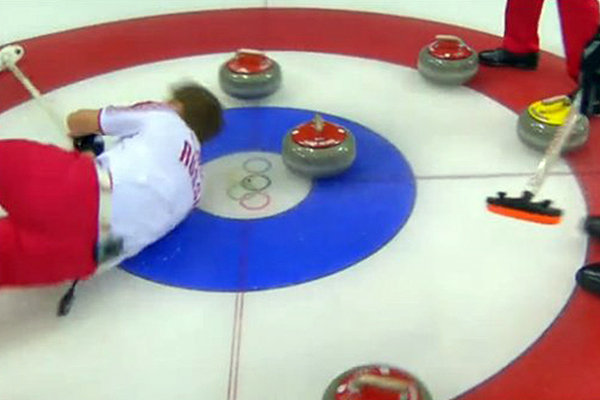 Sochi, Russia - Russia is no novice when it comes to most ice games, but for the Olympic game of curling, they are rookies at the 2014 Winter Games. If the team was expecting to get a bump from the home field advantage and the hometown fans, it is not happening. The team is going up against a seasoned Norway today with a 1-4 record.

In their first match, Russia was handily dispatched by Great Britain by a score of 4:7. By game two against Denmark, they fared much better and almost pulled off an upset victory losing in extra time by a score of 10:11. In game three, they lost again to Norway.

However, the fifth time was the charm as they scored their first victory against the Swiss team yesterday. It came despite an embarrassing moment for Curler Andrey Drozdov who wiped out on the ice in spectacular fashion. The rookie moment came when Drozdov was in what are called "sweeps" in curling lingo and his feet literally went out from under him as seen from the overhead camera. This sent the Russian player on a horizontal trajectory with the ice where he smacked his face on the cold area floor. It looked much worse than it was and his team did walk off with a 7:6 victory.

On The Web:
Russian curler face-plants During Match
http://mashable.com/2014/02/13/russian-curler-faceplant/

Related Topics:Russian curler face-plants
Up Next

us speedskaters uniforms: Sour Grapes Or A Real Problem?