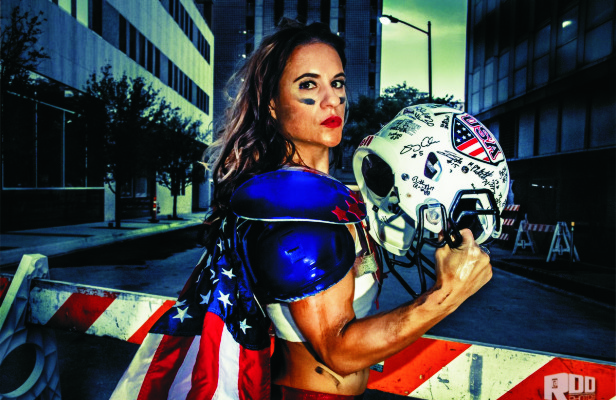 First Female Running Back[/caption]Bitty Little Female Running Back in All-Mens League Earns Street Cred
Jennifer Welter, a 5'2" 130-lb petite woman, made her debut in the all-male Indoor Football League for the Texas Revolution. Now, there have been women to play in the league before, but Welter's debut was the first time a woman has dared to play a contact position. Prior women took the roles of kicker or place-kick holder. Her position is running back.

Well, the opposing players on the Texas Crunch were geared up to acquaint her with the meaning of their team name. On the first hand off to her, she was tackled by a 235-lb slab of muscle that thrust her down to mother earth in this indoor arena. Welter got back on her feet and resumed play. Despite losing a yard on the play and amid taunts from a rejuvenated Crunch team, she retorted "Is this all you've got?”

In all, the first female running back played only three carries for a net one yard of rushing. One defensive player by the name of Cedric Hearvey admitted he held back on his tackle because of her gender. He explained that he wanted to let her score, but in the end did his job. In all, Welter gained some respect from players on both sides in her team's 64-30 victory.

According to FOX Sports, Welter, 36, is no amateur either. She has played linebacker for the Dallas Diamonds of the Women's Football Alliance since 2004, and is a veteran rugby player. In 13 years in Women's Pro Football, she's an eight-time Pro-Bowler.

But she was presented with a new challenge when the Revolution came calling.

"I told them, 'I respect football first and foremost,' " Welter told the Dallas Morning News. " 'If this doesn't respect the game, if it's just some gimmick, I won't do it.'

Welter says she want's to show that women are passionate about sport and deserve a bigger stage.

“I’m an athlete, I’m competitive,” she told For The Win. “But the bigger thing for me is obviously for little girls to see they can do everything just like little boys can."

Check out a video of the First Female Running Back in a pro game.

On The Web:
First Female Running Back Gets Tackled Hard in Indoor Football League (VIDEO)
http://global.christianpost.com/news/first-female-running-back-gets-tackled-hard-in-indoor-football-league-video-114695/

Related Topics:First Female Running Back
Up Next