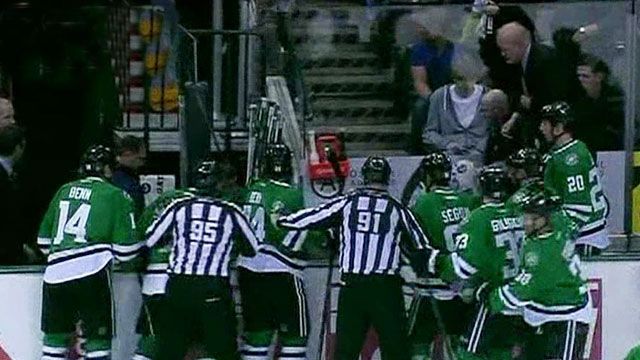 Dallas, Texas - It was a regularly scheduled match between the Dallas Stars and the Columbus Blue Jackets Monday night. Early into the game, the Blue Jackets took a 1-0 lead in the first period. However, that would be all the game would amount to on this evening. Dallas star Rich Peverly collapsed on the bench causing a frantic commotion of players to get him into a tunnel for treatment. Peverly was rushed to a nearby hospital for observation. Apparently, the 31-year-old Canadian from Guelph, Ontario, has left quite an impression on his fellow NHL players. Both teams were so taken back by his medical emergency that authorities postponed the match for a later night.

“When he dropped, it was red alert,” Stars coach Lindy Ruff said. “Don’t worry about the game. It was about getting the doctors. The players don’t want to play, and I don’t want to coach the team right now.”

Peverly has a known heart issue that was surgically corrected six months ago. His recuperation spilled into part of the current season with him missing the first three weeks of league play. In the words of Dallas coach Lindy Ruff, Peverly's first period collapse left the team without the will to play and he himself without the will to coach. For now, Peverly is said to be in stable condition, but it is confirmed he suffered what is called a "cardiac event". It is not clear if and when he will return to the ice.

However, what is foremost on his team's mind is his ability to live. He was unconscious until hospital emergency staff began giving him oxygen.

Coach Ruff is confident that he is currently receiving the medical attention he needs.

“He’s going to be OK,” Ruff said. “The care he’s getting and the care going forward is the most important thing.”

Sochi Olympic Torch Returns To Earth After Trip To Space