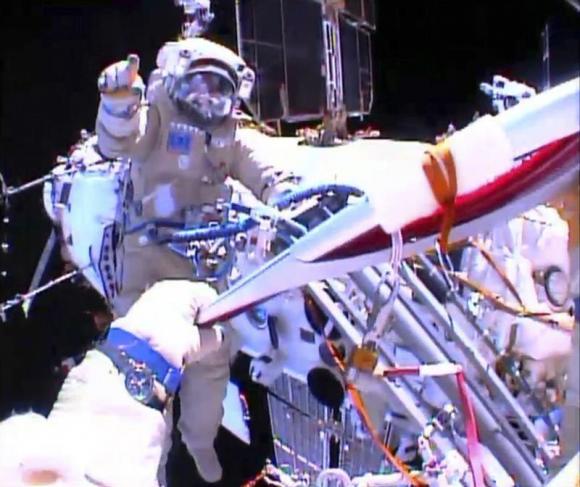 Russian astronaut Oleg Kotov holds an Olympic torch as he takes it on a spacewalk as Russian astronaut Sergei Ryazansky gives instructions outside the International Space Station in this still image taken from video courtesy of NASA TV, November 9, 2013.
CREDIT: REUTERS/NASA TV/HANDOUT VIA REUTERS[/caption]Sochi Olympic Torch Bearers Have Returned From Space

According to an article just published in the Mail & Guardian, the torch bearers from the Sochi Olympics have returned from outer space.

The group of three astronauts (actually, one American astronaut and two Russian cosmonauts), who distinguished themselves by carrying the Olympic torch during the recent round of games in Sochi, have managed to return safely to Earth. Their safe arrival home was an especially welcome event, as bad weather conditions had raised questions concerning their safety.

Luckily, no problems were reported during the landing of the heroic trio. They returned safely from the International Space Station, landing in Kazakhstan at the site of Zhezkazgan. Severe weather conditions notwithstanding, the small Soyuz capsule made a safe landing at the remote site in the central plains region of the country, without incident.

The crew was reported to have conducted some three dozen separate scientific experiments during their stay aboard the International Space Station. They left behind a small working crew of Japanese astronauts, who will keep the station running until such time as a fresh crew of explorers, drawn from an as yet unnamed nation, will relieve them.

In the meantime, the torch bearers from Sochi are reported to be in excellent health and spirits, and enjoying their new found fame. Luckily, no signs of tension between Russia and the United States over the recent events in Ukraine have affected the space program. The three astronauts have not commented on the matter, nor have they shown any signs of dissension among themselves.