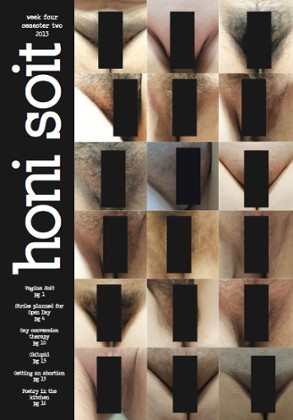 Sydney, Australia - the student newspaper called "Honi Soit" at the University of Sydney, Australia's oldest student daily periodical, was doing a cover story on how society constantly dictates how a person should react to their own bodies. The lead photograph for the story was quite novel: feature a collage of close up photographs women's vaginas which would underscore the news piece. The newspaper editors had every intention of publishing the article with the photographs untouched.

“We spoke to women we knew and the Women's Collective and got a really warm response,” editor Hannah Ryan said. The women were all photographed by a fellow University of Sydney student in the campus' Women's Room.

Ironically, the Student Representative Council (SRC) which is the actual publisher of the "Honi Soit" thought otherwise. They ruled that the female genitalia should have a black box covering the center of each vaginal shot to censor the most intimate part of the organ. Regardless of how one views the subject matter at hand, that ran contrary to the whole purpose of the cover story. Nevertheless, the "Honi Soit" agreed and ran thousands of print copies showing eighteen vaginas with transparent black boxes on the center.

That sparked a major controversy which resulted in the Wednesday issue of the newspaper being recalled and destroyed.

Editor Hannah Ryan says the transparent black boxes were not an affront to the SRC, but rather a printer error. However, she was pleased that the print version was much more in harmony with the original intent of the article.

Writing in The Guardian, four of the paper’s female editors write: “We are tired of society giving us a myriad of things to feel about our own bodies.

“We are tired of being pressured to be sexual, and then being shamed for being sexual.

“By distributing this cover about the university, we have given our audience no choice. Either accept vaginas as normal, non-threatening, and not disgusting, or explain why you can’t.”

They add: “That in 2013, vulvas can still be considered something that should be shunned and hidden, or offensive, is absurd.”

One of the magazine's ten editors, Mariana Podesta-Diverio, told news.com.au all 4000 copies of the paper had been seized by the university's Student Representative Council.

Are vulvas so obscene that we have to censor them?
http://www.theguardian.com/commentisfree/2013/aug/22/honi-soit-vulvas-censorship

I-80 sinkhole: US Interstate Victim Of Latest Sinkhole