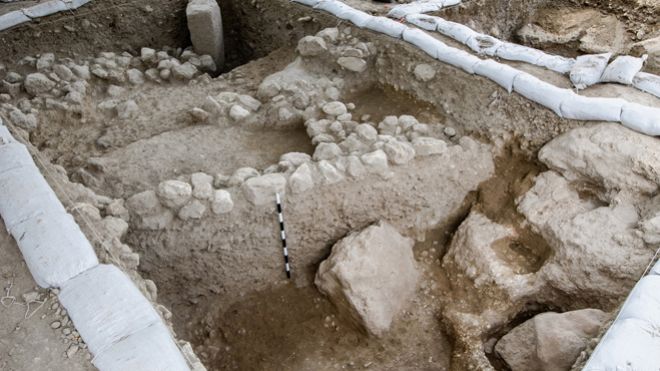 Perhaps our perception of the ancients needs an attitude adjustment because today Israel will begin to allow public viewing of a 10,000 year old house. Now, that is certainly a structure made with quality in mind. In fact, the house had undergone both repairs and renovations. While it is true that for much of its 10,000 years it remained safely underneath a thick layer of earth, the home did survive.

"This is the first time that such an ancient structure has been discovered in the Judean Shephelah," the archaeologists said in a prepared statement, referring to the plains west of Jerusalem.

The domicile is part of a newly excavated find in the Judean Shephelah (Western plains) in the city of Eshtaol which is 17 miles west of Jerusalem. In addition to the home, a 6,000 year old temple was found. As for the home, archaeologists believe that the residence is almost 100% intact. It represents an era when man began to shift towards using domesticated animals as opposed to a more nomadic lifestyle of chasing food in the wild.

"Here we have evidence of man's transition to permanent dwellings and that in fact is the beginning of the domestication of animals and plants; instead of searching out wild sheep, ancient man started raising them near the house," the archaeologists said.

As for the temple, it consists of six sides with the entrance facing eastward. It is this characteristic which led the archaeologists to conclude the stone building served religious purposes. There is evidence to suggest that the community built around the temple was carefully regulated or planned. On The Web:
10,000-year-old house, other ancient finds unearthed in Israel
http://www.cnn.com/2013/11/26/world/meast/israel-archaeological-finds/index.html

Afghanistan Mulling Over Reintroduction of Public Stoning for Adulterers