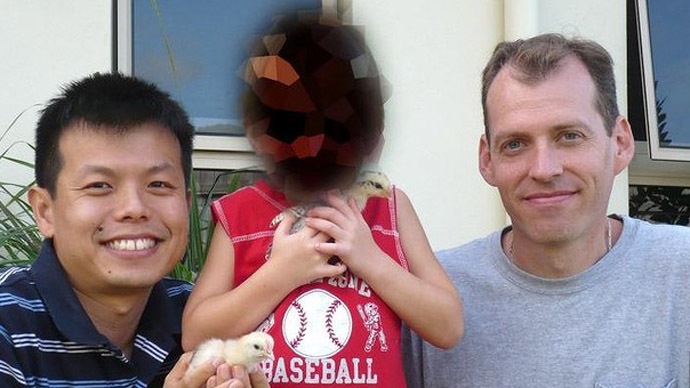 Mark Newton, right, with Peter Truong and their son outside their Cairns home. (Image from brisbanetimes.com.au)[/caption]

Indianapolis, IN - Convicted pedophile Peter Truong was literally all smiles as he was brought into superior court this week for his sentencing on one count of conspiracy to sexually exploit a child and one count of conspiracy to possess child pornography. However, Truong wasn't smiling as anyone who regularly watches the genre of stereotypical TV "Let's hate the criminal" criminal dramas like CSI or Law & Order. Rather, Truong was smiling because he believes his apprehension freed both him and his son from a vicious cycle of child sex abuse.

Truong and his partner Mark Newton, age 40, were both from Queensland, Australia. They purchased a baby boy for $8,000 USD and by the time the child was six years old, they had rented him for sexual intercourse with pedophiles around the world, filmed themselves engaging in sexual abuse of the child for pornographic movies to be sold in secret pedophile rings.

Since his capture, Truong has worked with authorities to help them arrest other pedophiles. Pedophiles are notorious for their stealth activity and ability to work through legal loopholes. Truong said he was sexually abused as a young man and involved in the pedophile network from an early age. He was sentenced to 30-years in prison.

When in court earlier this year, Newtown apologised for his horrific actions, saying "being a father was an honor and a privilege that amounted to the best six years of my life."

"I'm deeply sorry," he said. "And I regret any harm I caused to my son or anyone else."

"Words don't help," responded Judge Barker. "What can be said? What can be done to erase some of the horror of this?"

Queensland Police officer Jon Rouse, who investigates online child exploitation as part of Taskforce Argos, has vowed to not rest until all the men involved in the network are behind bars.

"With this network, rest assured that we will pursue them to the ends of the Earth to make sure each and every one of them faces justice for what their role has been in crimes against this child," he told 7.30 earlier this year.

"The purchase of the child for the explicit and sole purpose of exploiting him across a network of men is incredibly depraved and a very sad tale for that little boy."

On The Web:
Australian pedophile Peter Truong gets 30 jail years in US
http://www.news.com.au/world/australian-pedophile-peter-truong-gets-30-jail-years-in-us/story-fndir2ev-1226779322405

Aussie pedophile gets 30 years in US jail
http://www.theaustralian.com.au/news/nation/pedophile-peter-truong-who-bought-boy-jailed-in-us-for-30-years/story-e6frg6nf-1226779404708