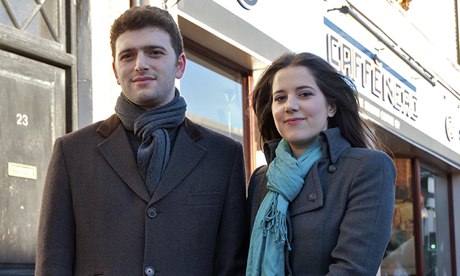 Louisa Hodkin and Alessandro Calcioli, who have won the right to marry in a Church of Scientology chapel. Photograph: Withers/PA[/caption]Woman Wins UK Supreme Court Approval for Wedding in Scientology Chapel

London, England - Louisa Hodkin will have her wedding day in her chosen venue which is a chapel for the Church of Scientology. It was her desire to take her wedding vows there with her fiancé Alessandro Calcioli. However, the registrar general of births, deaths and marriages denied her a marriage license citing that the chapel for her religion did not constitute a "place of worship".

Hodkin did not accept the decision and initiated a court challenge. At the beginning, the challenge did not go her way. This was largely because legal precedent was against her. In 1970, the UK Court of Appeals came down against the Church of Scientology stating that their fundamental disbelief in the existence of a god or supreme being precluded their chapels from being places of worship. If the chapels were not places of worship, marriages could not legally be performed there.

Well, that was then. Now, some 43 years later the Supreme Court overturned that ruling in a unanimous 5-0 decision. The nation's highest court ruled that despite Scientology not believing in a supreme being, people gather at the chapel for regular worship and as such are allowed to hold legal wedding ceremonies.

He said: "I am very concerned about this ruling, and its implications for business rates.

"In the face of concerns raised by Conservatives in Opposition, Labour ministers told Parliament during the passage of the Equalities Bill that Scientology would continue to fall outside the religious exemption for business rates. But we now discover Scientology may be eligible for rate relief and that the taxpayer will have to pick up the bill, all thanks to Harriet Harman and Labour's flawed laws.

"Hard-pressed taxpayers will wonder why Scientology premises should now be given tax cuts when local firms have to pay their fair share.

"We will review the Court's verdict and discuss this with our legal advisers before deciding the next steps. However, it will remain the case that premises which are not genuinely open to the public will not qualify for tax relief."

There's not date yet as to when Hodkin will tie the knot.

burglary suspect brings toddler along for the heist