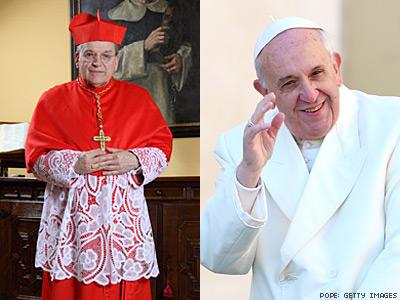 Pope Francis seems to be taking some steps to prove that he really earned the "Time's Person of the Year" Award this year. The newly elected Pope made wide sweeping changes and showed a face of compassion that was lacking at the head of the church in recent years past. Just this week Pope Francis made an adjustment in the Vatican Office and removed the controversial and conservative US born Cardinal Raymond Burke from his position there.

Cardinal Burke ruffled more than a few feathers back home in the United States when he publicly spoke out against pop singer Cheryl Crow and called for boycott of her concert based on her views on abortion. He also publicly stated during the 2008 presidential election that he would refuse to give Holy Communion to Catholic Presidential candidate John Kerry based on the democratic party's stance on abortion rights. Burke has also been tagged as an enemy of women's groups and has spoken out several times against allowing women into the priesthood.

“One gets the impression, or it’s interpreted this way in the media, that he thinks we’re talking too much about abortion, too much about the integrity of marriage as between one man and one woman,” Cardinal Burke said of the pope in an interview with EWTN, a Catholic broadcaster. “But we can never talk enough about that.”

Pope Francis seems to be a leader for the Vatican that is unafraid of change. He's already built a strong following based on his openness and views about all of humanity. Cardinal Burke has simply refused to change with the times.

Mandela feud starts as locks are changed on grandson

Indian woman delivers 10 babies in one night – all stillborn