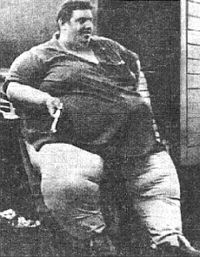 Samuel Cann quit his job at age 28 because he was too overweight to dress himself and leave his home. For the next 12 years he sat in a chair in his living room eating a steady diet of pies and burgers refusing to get medical help for his obesity despite offers to help. On February 14th his lifestyle caught up with him when he fell out of his chair and was unable to get up.

His wife, Jody Cann, was forced to call the paramedics for help when she found her husband had slide out of his chair and onto to the floor.

According to the Mirror, emergency crews were forced to hoist the morbidly obese man after he slipped from his seat and was unable to lift himself back up.

They found that he had ulcers and pressure sores which is why they decided to transport him to University Hospital North Staffordshire.

Upon admittance Cann refused to have any emergency treatment procedures performed and six days later he died. His death certificate reads that he died from sepsis from infected sores and ulcers and obesity.

At an inquest earlier this week, a court heard how Mr Cann developed a range of health problems and died six days after his fall, reports the Huff Post.

His wife, Jody, told assistant coroner Margaret Jones how he was a stubborn man who refused medical help for his weight problem.

She said: "I went to sleep on February 13 and woke up about 9am the next day to Samuel shouting my name. He had slipped off his chair and was sitting on the floor on his bottom.

"Me and Sam often used to have arguments because I always wanted to call for medical help for him. He was housebound so the doctors had to come to us, but he was reluctant to have medical treatment," Cann's widow, Jody, said at the inquest. "He was told he was the perfect candidate to have his stomach stapled but he refused to have the operation. He was a very stubborn man." He was told earlier in life that he was a perfect candidate to have his stomach stapled but he refused this procedure as well and doctors stated that obesity is the true cause of his death.

Mr Cann's GP, Doctor Souvrik Chakraborty, of Mansion House Surgery, in Stone, said: "He was grossly obese. He was seen by one of my colleagues who was trying to encourage him to lose weight. He had been referred to a dietician in 2007 but he gradually became housebound because his obesity was so severe.

"He also had lymphedema and swollen legs, but the heart of the issue was Mr Cann's obesity.

"He also could have done more exercise and looked after the state of the room he lived in. The route cause here is obesity."

According to Guinness World Records, the heaviest man to ever live was Jon Brower Minnoch, an American who once weighed in at 976 pounds. Although Minnoch struggled with obesity his entire life, he cut his weight down to 476 pounds at one point. By the time he died in 1983, he weighed more than 798 pounds. Man who weighed 40 STONE and lived on burgers and pies died after falling out of CHAIR
http://www.mirror.co.uk/news/uk-news/samuel-cann-inquest-40-stone-man-2939160

Samuel Cann Dies After Fall 40-stone man Samuel Cann died after falling out of chair at his home in Stone
http://www.stokesentinel.co.uk/40-stone-man-died-falling-chair/story-20334777-detail/story.html

Samuel Cann Dies After Fall: lived on burgers and pies died after falling out of armchair
http://www.dailyrecord.co.uk/news/uk-world-news/man-who-weighed-40-stone-2942448

kaelyn krawczyk Allowed To Have Service Dog In Surgery Room