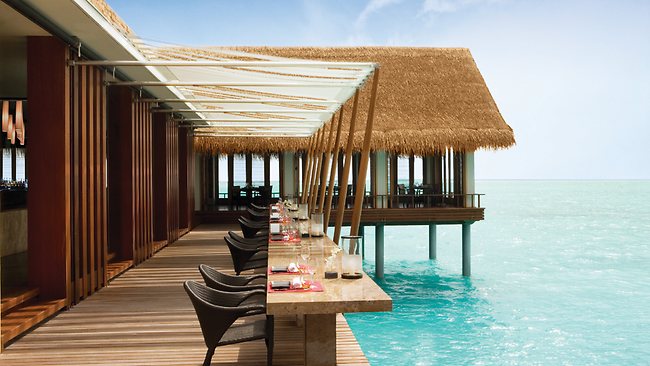 Body Washes Ashore at the Island Resort for the Beckham's Vacation

Malé, Republic of Maldives - Just as the famous couple of David and Victoria Beckham are enjoying a family vacation at a secluded Island resort in this tiny nation in the Indian Ocean consisting of 26 atolls (coral reef islands), a human body has washed up to shore on the island.

"The body was removed to a morgue and investigations are underway," police spokesman Hassan Haneef said.

Police are investigating the cause of death for the man whose body was found along the jetty for the resort known as "The One and Only Reethi Rah".

The body of man has been identified as being a native of Sri Lanka. He was not a patron nor an employee of any establishment. His body was taken to the morgue for an autopsy.

Also, a cache of fireworks accidentally exploded ahead of the New Year's celebrations causing a shattering disturbance. This is bothersome to the Island's patrons who come to Malé to experience their unique weather, coral reefs, and ultra-rich amenities. It is common for patrons to spend in excess of $12,000 USD a night for their stay in the upscale hotels. That amount of money is a multiple of what most families in the United States and Canada pay for an entire vacation much less a single night.

Despite the tragedy, Beckham, his wife Victoria and their four children remained at the de luxe resort despite the problems yesterday, tourism sources said.

Haveeru reports that the Beckham's also spent last Christmas at the luxury destination.

According to the AFP, tourism in the area has suffered setbacks in recent years due to political unrest following the resignation of former president Mohamed Nasheed in February 2012 in what he later alleged was a coup.

The Beckhams cut another holiday in the Maldives short this time last year after they were hit by torrential rain. To die for... The meal area of One & Only Reethi Rah resort on North Male Atoll, in the Maldives, where David Beckham is holidaying with his family. A body washed up on the island on Monday. Source: Supplied
[/caption]

On The Web:
Body washes up on Beckham’s hideaway island in Maldives
http://www.themalaymailonline.com/world/article/body-washes-up-on-beckhams-hideaway-island-in-maldives

Are the Beckhams having a holiday from hell? Body washes up on Maldives beach followed by huge fireworks explosion at resort where family are staying
http://www.dailymail.co.uk/news/article-2530749/Are-Beckhams-having-holiday-hell-Body-washes-Maldives-beach-followed-huge-fireworks-explosion-resort-family-staying.html