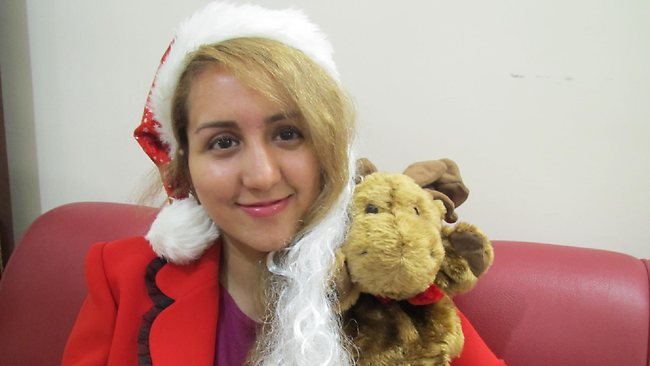 Gift of life ... This recent but undated photo provided by Sara Nezami shows Sanaz Nezami, a vibrant 27-year-old native of Tehran, Iran who police believe was a victim of a fatal beating by her new husband in early Decembe. With the familys consent, her critical organs weretransplanted to seven people in five states. Source: AP[/caption]Iranian Family Watch Daughter Die via Laptop Webcam

The Muslim family of Sanaz Nezami watched their daughter pass away at the young age of 27 last month. She was suffered severe brain trauma at the hands her husband whom she had recently married. Following the attack, she was left brain dead. The hospital said the cerebral swelling was so intense that blood flow the brain was cut off.

"We wanted God to perform a miracle and bring Sanaz back to life," her sister, Sara Nezami, said in a phone interview from Tehran. "But this is a miracle. Sanaz gave her life in order to give life."

A nurse who took care of Nezami said her brief stay, especially the high-tech way of communicating with family, was "eye-opening" for staff at Marquette General Hospital. Senaz had married Nima Nassiri in August and lived with him temporarily in the Los Angeles area, where he was born and raised. The couple had met online [/caption]

"The family was willing to trust us to know she wasn't coming back," Kim Grutt said.

What makes the case of Nezami so poignant is that hospital staff and local Christians worked with her Muslim family in Iran to give them peace regarding her imminent death. One hospital worker successfully contacted the family despite them having no address, phone number, or contact name.

Next, the hospital staff provided a laptop with webcam so that the family could watch their unconscious daughter's final moments from their home in Iran. Family members were said to go in and out of living room to watch and pay their final respects.

They prayed in Persian, Arabic, and English for their daughter. At the family's behest, a hospital nurse lovingly stroked their daughter's forehead and kissed her. A local Episcopal pastor pledged to visit their daughter at her grave site as long as he is alive. The family then authorized her seven vital organs to be donated to others so that Sanaz could give life to others as she departed this world. Her husband is charged with second-degree homicide. Family of Iranian woman 'beaten to death by her boyfriend' watch her die in American hospital via the internet
http://www.dailymail.co.uk/news/article-2532345/Dying-womans-family-spent-final-hours-online-Iran-shes-fatally-beaten-husband-6-000-miles-away-Michigan.html

Related Topics:Family watches Sanaz Nezami die from Iran
Up Next