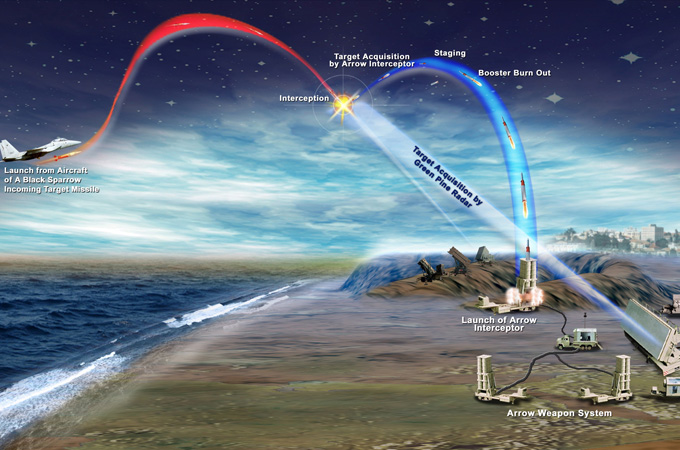 Jerusalem, Israel - The Israeli government has successfully tested a missile interceptor for their new Arrow III missile defense system yesterday. The new Arrow III system test is part of their ongoing effort to replace their ten year old missile defense system. The new version will include special satellites called "kamikaze killers" which will shred missiles while they are sufficiently high in the Earth’s atmosphere to pose no threat to them below whether they carry nuclear, biological, or chemical warheads.

Thus far, the Israelis say the Arrow III has destroyed its targets at a success rate of every 9 out of 10 attempts. It is without question that Syria and Iran have weapons of mass destruction deliverable by missile. However, the Israelis believe that the ongoing civil war in Syria has destabilized the region giving Hezbollah the opportunity to obtain such missiles as well.

Speaking before reporters yesterday, Yair Ramati, Israeli Defense Minister, said that the "kill vehicle" recently tested continued its missile killing operation a full two minutes after jettisoning it's booster. US Defense Officials were present for the test. If all goes well, Israel expects to have the new system fully operational by next year.