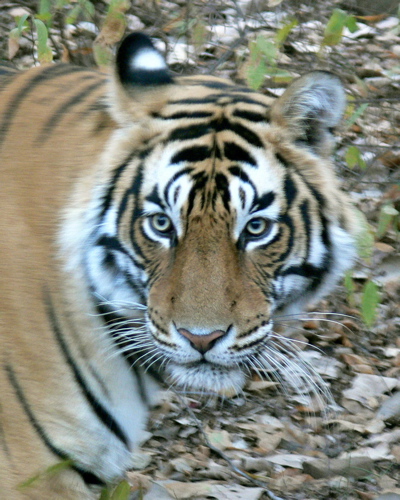 Tiger hunt after fourth victim killed in India: The Hunt is On for Tiger After It Kills Fourth Victim

Uttar Pradesh Province, India - Authorities are eager to drive a man killing tiger back to its natural habitat on the Jim Corbett National Park. Most recently, the body of a 40-year-old woman was found bearing the distinct fang and claw marks typical of a tiger. Her death brings the death toll to four.

"We have identified four bodies that were killed by the tiger as they bore teeth and claw marks," a senior official from the district told Yahoo News.

"We have launched a thorough search and hope it will go back to its natural habitat."

"We have seen the pug marks of the tiger. It is moving around somewhere close by," HC Kantharaju, conservator of forests in Bandipur tiger reserve, told BBC Hindi.

"We will try to pump in tranquilisers as soon as our colleagues find the rogue tiger," C Shrinivasan, director of Project Tiger in Mysore, said.

Admittedly, tigers are on the endangered species list, but given that this tiger in particular is killing humans, it is curious as to why the search doesn't involve big game hunters eager to mount the feline's head on their wall. After all, it has killed four people.

Local villagers have been voicing their calls for action to the local government. Inside of a fortnight there have been four deaths from the tiger. It should be noted that the villagers are also wanting the animal to be taken back to a nature preserve as opposed to being put down.

There are not many tigers left alive today. By some estimates the total tiger population stands at only ~3,400 of which 1,700 or half reside in India. The Jim Corbett National Park is itself home to 200 of those tigers. The authorities have good reason to suspect this one tiger is a stray from the park. The 2010 National Tiger Assessment estimated the total population of tigers in India as 1,706. This exhaustive study indicated that better protected tiger source sites, especially tiger reserves, have maintained viable tiger populations, however, the area occupied by tigers outside protected areas has decreased considerably. This demonstrates the need for securing corridors for tigers to move between source sites. The existing tiger reserves represent around one-third of India's high density forest area.[/caption]