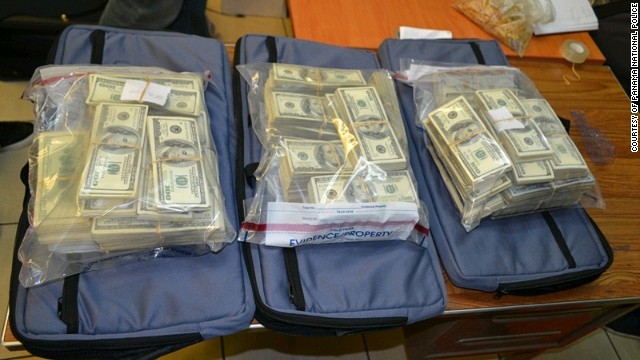 Panama City, Panama - In what is turning into a growing scandal of police corruption, Panamanian police arrested three Honduran nationals at the Tocumen International Airport following a tip of a looming drug money run. Authorities were waiting at the airport and diligently went through baggage when they found their biggest seizure of ill-gotten gains in years. In total, they uncovered $7.2 million USD largely in the form of $100 bills hidden inside eight suitcases. Put another way, they recovered roughly 72,000 hundred dollar notes or 9,000 notes per bag.

Now, questions remain to be answered. Honduran authorities are embarrassed that such a large cache of money could sneak through Toncontin airport, their nation's largest airport, reports CNN.

Obviously, what their investigators are looking for is anyone with oily palms that the drug money runners greased in order to get through security. The question also remains of whether or not Panamanian police would have been able to make the discovery if it had not been for the tip they received.

"In a case that highlights the regional impacts of the drug trade, now Honduran investigators are trying to figure out how the suitcases slipped by airport authorities, drug police and special investigators at the Toncontin airport in Tegucigalpa," reports CNN.

The 7.2 million in cash found is believed to belong to a powerful Honduran drug cartel, but authorities aren't disclosing which cartel that would be. Thus far, dozens of police officers have been suspended in this growing scandal.

Related Topics:7.2 million in cash found
Up Next