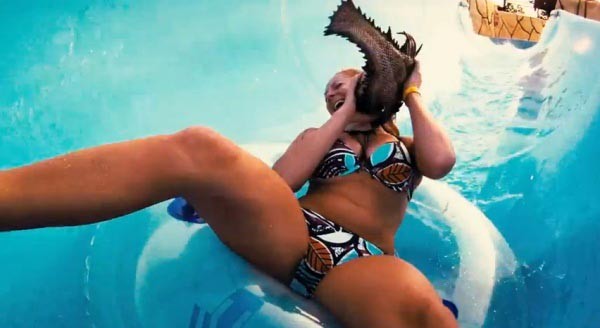 Argentine river piranha injured 10 (movie still from Piranah 3DD Courtesy of Dimension Films)[/caption]Another Series of Attacks by Piranha-Like Fish in Argentina's Paraná River
The Paraná River, Argentina - It was only six weeks ago that 60-70 swimmers fled the waters of this river with minor injuries mainly consisting of scar rendering bites taken out of their flesh by palometa fish, a cousin of the piranha.

Now, authorities are reporting that as many as ten more people have been injured in these same waters over the weekend. Seven of the victims were children who now bear permanent loss of fingers and toes. The Paraná River is located roughly 300km (~186 miles) northeast of Buenos Aires. While Canadians and Americans have been battered by heavy snows and severe wind chills, Argentinians have been roasting in the heat as it's summertime in South America.

The early December attacks were attributed to local fisherman tossing refuse from their fishing operations into the water and transient shoals appearing near the shores which conditions are prone to attract palometas.

Piranhas are known for their voracious appetites and their penchant to go into feeding frenzies on their prey. With that in mind, the palometas are known as being "aggressive". It is believed that local fisherman littered their fish debris in the river which ultimately attracted the palometas.

This time around, authorities are blaming a decrease in caiman population which prey on the palometas and a much warmer Austral summer. Maybe the answer is a lot simpler than the prior explanations. It could just be that the waters are naturally infested with these piranha-like fish and aren't safe for swimmers.