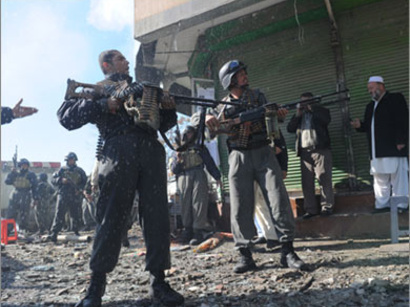 Many people view volleyball as an entertaining sport played mostly in high school-aged children and above. In Afghanistan, however, volleyball can be a dangerous and ultimately deadly pastime.

Yesterday, in a village in the Alingar district, five boys were shot while playing a simple game of volleyball by a lone gunman from a neighboring village. Although it is unsure as to why these young boys were shot dead while playing volleyball, many speculations are surfacing. One of which includes that the enemies of the Afghans are having a difficult time accepting the achievements that these young boys have gained in sporting activities.

This incident would not be the first attack on children in Afghanistan either. Several stories emerged in the past of children doing innocent acts, such as dancing in the rain or playing soccer or football in the field, who have met with violence. These children are being targeted because they are easy targets. They are innocent, young and small, which are elements or traits that make it easier for a gunman to prey on this particular group and destroy their lives. The men, who committed this heinous crime, are deemed to be cowards who committed cowardly attacks.

The culprits remain at large.