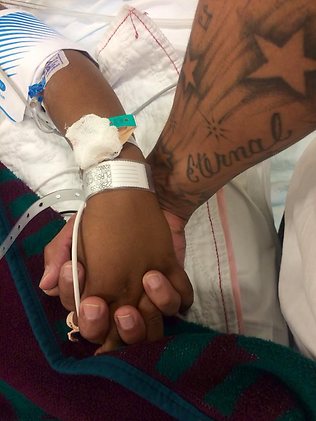 Stockton, California - Emergency responders arrived at the residence of the Plascencia family at the 7700 block of Brentwood Drive to respond to a tragedy.

The family's 8-year-old son had hung himself from the doorknob of the master bedroom using a scarf. It is believed he was mimicking something he had watched on television.

Prior to being discovered, Julianni Plascencia had told his brother what his intentions were and he was admonished not to speak in those terms. His brother also said he would tell their parents if he spoke like that again. However, he didn't take him seriously.

During the brief time the mother stepped out for groceries, the young boy made his attempt. He was found listless at 9:30PM when phone call came to 911.

He was life flighted to UC Davis Medical Center, but was never able to regain consciousness. Doctors were unable to get his heart beating again.

His father, Ronnie Plascencia, was photographed lovingly holding him during his last moments of life.

"Rubbed his head, kissed him, held his hand ... And to be there for him at the, you know it was time for him to go to heaven," he said.

The family is devastated with all manner of self-incrimination, but they trust that he went on to a better life. His brother wishes he had kept an eye on him, and his mother wishes she had not stepped out for groceries.

Julianni’s mother, Shfawn Plascencia, said she was struggling to understand how her son could be gone.

"I feel a lot of pain. A lot of confusion. A lot of sorry for not being available for him," she said. The boy's family have launched a fundraising page on GiveForward.com to collect donations towards his final expenses. So far, they have raised just over $1,000 – about 25 per cent of their $4,000 goal.

On Friday, The North Stockton Bengals youth football league, which Julianni had joined only last year, will host a spaghetti dinner at Bear Creek High School to help the Plascencia family.

'His heart was too big for this world: ' Parents' anguish after their church-loving son, 8, hanged himself from a doorknob 'while reenacting movie scene'
Follow us: @MailOnline on Twitter | DailyMail on Facebook
http://www.dailymail.co.uk/news/article-2544900/His-heart-big-world-Parents-anguish-church-loving-son-8-hangs-doorknob-reenacting-movie-scene.html