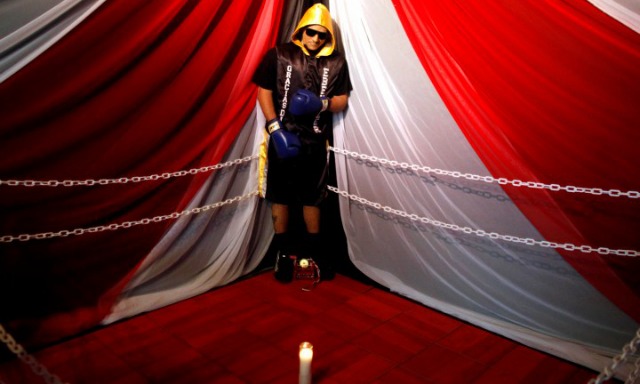 Friends and family who came to see recently deceased boxer Christopher Rivera at his wake in San Juan, Puerto Rico, were in for a bit of a surprise. According to a report published at the New York Daily News website, the body of the 23 year old man, was propped up in the corner of a simulated boxing ring.

Christopher Rivera died on Sunday after being shot to death in the city of Santurce. So far, no arrests have been made in connection with his death. The body of Rivera was dressed in a boxing outfit, with blue boxing gloves, dark sunglasses, and a yellow hood over his head. Even as a corpse, Rivera looked ready to go several rounds in the ring. Friends and relatives posted pictures online showing them posing with Rivera in the ring as he stood, propped up in the corner of the fake ring.

When reached for comment, Elsie Rodriguez, vice president of the Marin funeral home, explained to the press that Rivera had pre-planned the unusual wake. He had apparently requested of his family that, if he should die in the near future, he should have a funeral to make reference to his boxing career.