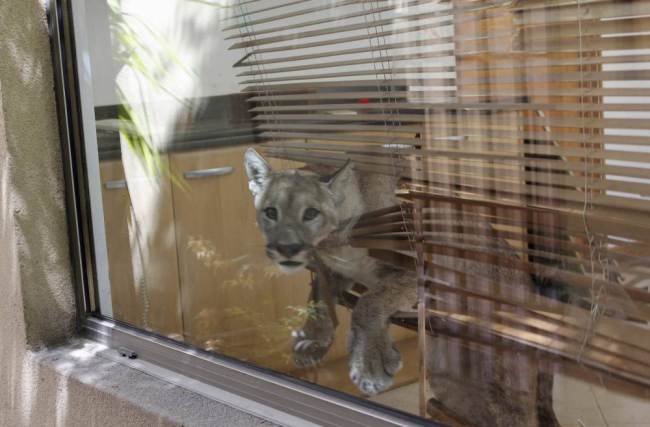 Nicholas Selma, a citizen of the Lo Curro area of Santiago, Chile, was awoken by his mother, Amalin Haddad, when he heard her scream coming from the kitchen. There was a full grown puma wondering around in their kitchen! Surprisingly, it did not hurt the mother, son, or their pet dog, which is surprising since pumas are known to eat any animal - excluding humans - they can get their paws on, but it did rip down the window blinds and tore up the couch.

The woman was able to take pictures of the puma and the damage it caused through the window and gave the photos to the South Africa’s Agriculture and Livestock Service. Pumas are fairly common in Chile, and they are the fourth largest feline in the world, weighing up to 220 pounds. The incident occurred while Amalin went into the kitchen to make breakfast, and she called the police the second she saw the wild animal. After the puma was sedated with tranquilizer darts, it took some time to remove him because of his weight. The animal was cared for graciously. The Puma was probably a pet, and the incident likely occurred when it escaped. He did suffer some minor injuries, so he was taken to the zoo for treatment. It is still unknown what will happen once the puma has recovered.

On The Web:
Puma In Kitchen Surprises Woman At Breakfast
http://uk.news.yahoo.com/puma-kitchen-woman-39-breakfast-surprise-221823622.html?vp=1&.tsrc=warhol#wp88XM8
Woman comes home to find a puma destroying her kitchen (the puma wasn’t even invited in)
http://news.yahoo.com/blogs/oddnews/woman-comes-home-to-find-a-puma-destroying-her-kitchen--the-puma-wasn%E2%80%99t-even-invited-in--181051278.html

Related Topics:Puma in kitchen
Up Next