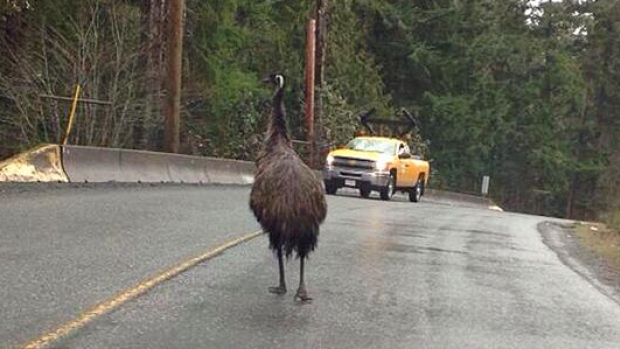 British Columbia farmer Tim Genner has been busy searching over the past week for a runaway emu named Lucy, who escaped from his farm in Cassidy last week when Genner neglected to ensure that the front gate on the bird's pen was securely fastened. Although Genner originally named the emu Lucy, upon closer inspection he discovered the emu was male, but decided to let the name stick. He opened a Twitter account named @Lucyontheloose to ask other Twitter users to provide him with any information about her whereabouts. There had been several reports of possible Lucy sightings, the most recent of which was near Colliery Dam. Then finally Genner received the welcome news that Lucy had been cornered in a homeowner's backyard near Nanaimo.

Taking Lucy back into captivity was no easy task. Although they are flightless birds, full-grown emus, the largest birds native to Australia, can reach over 6 feet in height in addition to being able to run at speeds of over 30 mph. Their feet are clawed and strong enough to kick through metal fencing. Emus use their legs as a defense mechanism against any attackers and Genner reports that Lucy thought he was fighting for his life when he attempted to corral him. The 16-year old bird, who weighs about 70-kilograms, put up quite a fight and began kicking with all the strength of a thoroughbred horse.

As a result of his efforts to finally contain Lucy in the back of his trailer, Genner took quite a beating, showing off his legs that were bloody and bruised from the emu's strong kicks. He advises other animal lovers not to adopt an emu as a pet unless they are prepared to ensure that their pen always remains very well fortified against escape.

On The Web:
Lucy the runaway emu has been found
http://www.cbc.ca/news/canada/british-columbia/lucy-the-runaway-emu-has-been-found-1.2582625

Related Topics:Lucy the runaway emu found
Up Next