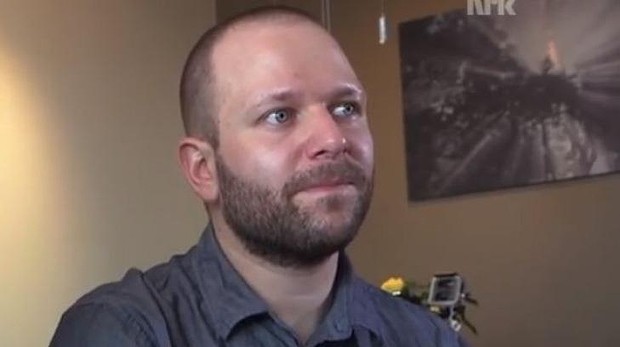 Norsk Rikskringkasting AS (NRK) or Norwegian Broadcasting as it's referred to the US has confirmed that video captured back in 2012 of Anders Helstrup narrowly avoiding a mid-air collision with a speeding rock during a routine sky dive was in fact a meteoroid.

Anders had kept the video recording private, but could never quite figure out what the source of the object could be. His inquisitiveness led him past thinking it could have been the result of an object coming from the aerial plane he had jumped from or even from a fellow jumper. He managed to get NRK to examine the footage and they confirmed it was that of a meteoroid.

The conclusion as to the identity of the object, which nearly collided with Anders, was made by Hans Amundsen, a geologist. Amundsen explained that the object had two distinct features that led him to that conclusion: a soft round side and a cracked side beneath.

"It can’t be anything else," geologist Hans Amundsen told the channel after examining the video. "The shape is typical of meteorites -- a fresh fracture surface on one side, while the other side is rounded.” Amundsen speculated the space rock was the remnant of a much larger meteor that had exploded as it entered Earth's atmosphere.

As a meteor strikes atmo, the heat friction melts and smoothens the exterior and shortly thereafter the meteor explodes with the falling debris being called meteoroids until they impact the planet and are called meteorites. Anders is still amazed he came so close to a collision with outer space debris.

a website dedicated to finding the rock is taking it very seriously. The site pledges the footage is authentic and hasn't been manipulated.

In an email to The Huffington Post, geologist Hans Amundsen reaffirmed the video's authenticity, writing, "I can guarantee you the story and footage is real, recorded just as it happened. I am aware that April 1 was 3 days ago, but this has nothing to do with that."

"The story is just as amazing to me as it is to most others that are trying to get their head around it," he continued. "I have tried to convince myself [of] every other possible explanation, but I can't seem to make myself believe it's something [other] than a significantly large object."