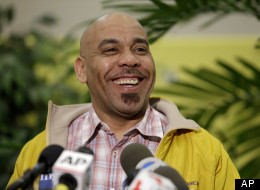 Pedro Quezada, the winner of the Powerball jackpot, talks to the media during a news conference at the New Jersey Lottery headquarters, Tuesday, March 26, 2013, in Lawrenceville, N.J. Quezada , 44, won the $338 million jackpot with the winning ticket he purchased at Eagle Liquors store in Passaic, N.J. (AP Photo/Julio Cortez)[/caption]Latest Powerball Winner Owes $29,000 in Child Support

Pedro Quezada, the New Jersey bodega owner who recently became the winner of the largest Powerball jackpot in history, may have mixed feelings about all the publicity that has occurred about his $338 million windfall.

It seems that he has attracted the attention of the Passiac County Sheriff's office in New Jersey to failing to pay $29,000 in child support payments. Quezada is acknowledged as the father of five children, but it was not announced by police officials as to which of his children are owed the overdue support payments.

The Passaic County Sheriff's office has a warrant that subjects the new lottery winner to possible arrest and the Sheriff reports that his officers are attempting to locate Quezada in order to settle the matter as quickly as possible.

The child support money that is owed by Quezada date back to payments which originally were owed in 2009. When a smiling Quezada was interviewed by the news media regarding his win, he mentioned that it was his intention to help as many people as possible with his newly found wealth, but he never mentioned that he owed almost $30,000 in child support payments to the mother of one or more of his children.