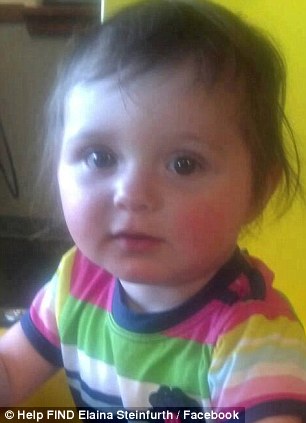 Toledo, OH - it appears that the missing whereabouts of baby Eliana Steinfurth, who was 18-months old at the time of her disappearance, may be ending in a tragedy.

On Thursday, police investigators searching the premises of the home where Eliana was last seen found human remains stuffed inside a computer box and tucked away in the rafters above a detached garage at the home. The remains are those of a child, but police are not announcing they are those of little Eliana until the forensic tests are concluded.

While police are officially withholding any announcement of the identification of the remains, some officers expressed their personal opinion that the remains might be those of the missing little girl. At the time that baby Eliana disappeared, her 25-year-old mother Angela Steinfurth was living at the home in question with her 23-year-old boyfriend Steven King II. The couple have since become estranged.

Police arrested both mother and boyfriend for obstruction of justice. It should be noted that no charges have been filed in connection with the human remains found at the home at this time. Back on June 1st, the Eliana's father arrived to pick up his daughters for visitation but was only able to find Eliana's 4-year-old big sister.

Related Topics:Baby Elaina
Up Next

49ers Fan Dies From Injuries After Fall At Candlestick Park