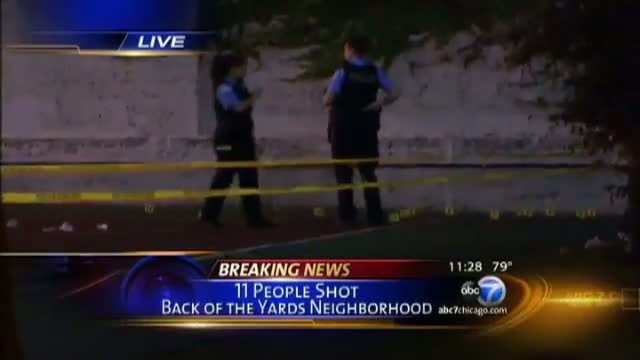 A park on Chicago's southwest side was the latest scene of the gang violence that has been plaguing America's second most populous city. Gang members recently sprayed a crowd with bullets fired from high powered assault rifles, wounding 13 individuals, the youngest of whom was a 3-year old boy.

Police officials contend that it was simply a miracle that no one suffered fatal injuries in the late night attack.

Criminal investigators were able to determine from the kind of bullets used that the weapons fired were 7.62mm rifles, guns which the police superintendent said were designed to be used in military battles, not in neighborhood disputes.

Garry McCarthy, Chicago's police superintendent, pleaded with city officials to take quick action to make the sale and use of such weapons within city limits illegal and pointed to the availability of such assault weapons as the major cause of Chicago's current atmosphere of gang violence.

People in the park were able to give a description of the men firing the weapons from a gray sedan and indicated that the assailants wore dredlocks.

A witness, Julian Harris, told the Chicago Sun-Times that dreadlocked men fired at him from a grey sedan before turning toward Cornell Square Park in Chicago’s Back of the Yards neighbourhood and firing at people. He said his 3-year-old nephew was wounded in the cheek.

“They hit the light pole next to me, but I ducked down and ran into the house,” Harris said. “They’ve been coming round here looking for people to shoot every night, just gang-banging stuff. It’s what they do.”

Mayor Rahm Emanual, who left a post in President Obama's administration in order to return to Chicago politics, assured citizens that the perpetrators would be brought to justice.

MORE FROM THE ASSOCIATED PRESS:

CHICAGO — A 3-year-old boy who was among 13 people wounded in a late-night attack on a southwest Chicago park was alert when he arrived at the hospital and was apparently doing well, his family and friends said early Friday.
The attack late Thursday in the city's Back of the Yard neighborhood left three victims, including the boy, in critical condition. The others were reportedly in serious or fair condition.

The child's uncle, Julian Harris, told the Chicago Sun-Times that dreadlocked men in a gray sedan shot at him Thursday night before turning toward nearby Cornell Square Park and opening fire. He said his nephew was shot in the cheek.

"They hit the light pole next to me, but I ducked down and ran into the house," Harris said. "They've been coming round here looking for people to shoot every night, just gang-banging stuff. It's what they do."

Police officials declined to discuss details of the investigation. Ron Gaines, a department spokesman, said no arrests had been made and that victims were being interviewed to try to determine the circumstances surrounding the attack, which happened shortly after 10 p.m.

Officer Amina Greer said at least 10 ambulances responded to the scene and took victims to several area hospitals. One victim transported himself to a hospital, police said.

The 3-year-old boy was taken to Mount Sinai Hospital. Hospital officials declined to disclose his condition, but fire officials said the boy's condition was critical.

The Rev. Corey Brooks, a pastor at New Beginnings Church, spoke with family members outside the hospital and said the boy was resting with his mother.

"He was talking when they first brought him in, but he's heavily sedated now," he said.

"They say he's good," said Semecha Nunn, the boy's grandmother. "They going to have to do a little plastic surgery on him, but he's OK."

Francis John, 70, said she was in her apartment when the shooting occurred. She said she went down to see what was going on and "a lot of youngsters were running scared." A 30-year resident, she said she was surprised by what had happened.

The shooting comes nearly three weeks after Chicago saw an outburst of violence over the Labor Day weekend that ended with eight dead and 20 others injured.

Following a surge in homicides and shootings last year, the police department stepped up its crime-fighting efforts by, among other things, paying overtime to add patrols to some neighborhoods, including the Back of the Yards.