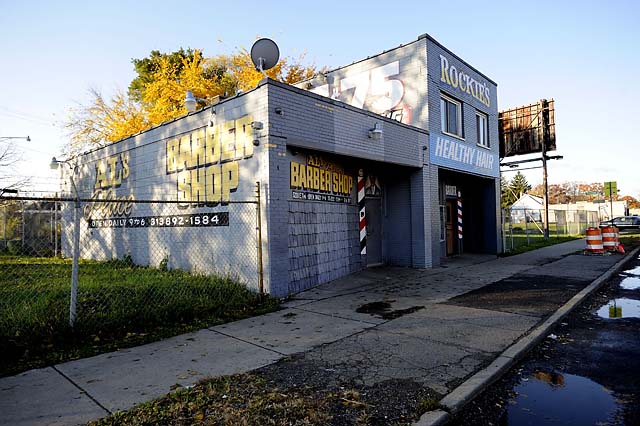 Al's Barber Shop sits in the 5200 block of East Seven Mile Road on Nov. 7, 2013, the morning after a mass shooting spree at the known gambling joint killed three and wounded six others in Detroit, Michigan. (David Coates / The Detroit News)
[/caption]Shooting in Detroit Barber Shop 3 Dead

Three people have been killed and nine injured in a shooting at a barber shop in Detroit. A group of men were gambling in a back room when a man opened fire with a rifle.

Police Chief James Craig said told reporters at the scene that "suspects engaged a couple of victims" before "several shots were fired." He said it's not known of any of the victims fired back.

"Right now the information that we have is that nine people have been shot. Of that number, we have three confirmed, pronounced (dead) at the scene. One we're not sure of."

This seems to have been part of an ongoing disagreement between the men gambling and the man who fired the gun. A person of interest is in custody, though they have yet to place charges on him.

The Detroit barbershop shooting happened at around 6 PM at a barber shop known as Al's Barber Shop. Though Detroit is known for violent crimes, this one is more violent than many others.

Police in the area are referring to it as Urban Terrorism. The person of interest in custody was actually arrested for a different felony charge. He was wearing a bullet proof vest, which may be an illegal possession.

There were 20 to 30 people in the room and bystanders heard 30 to 40 shots and at least one reported thinking that it was an automatic weapon.

Witnesses described a chaotic scene with customers scrambling to get out through the front door.

Several others, including small children, who were waiting to get hair cuts ran for cover across the street to the Fresh Fish and Chicken restaurant and Riviera Liquor Shoppe.

The barber shop is known as a place where gambling happens, and a game of dice was being played just prior to the shooting. Even with this incident Detroit's violent crime rate has dropped 6% recently.