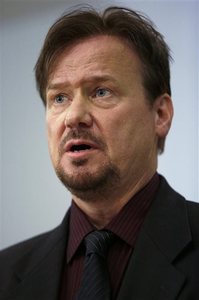 Philadelphia, PA - For Rev. Frank Schaefer of the United Methodist Church, the issue of gay marriage hit close to home. He has a gay son and when his son asked him to perform his wedding ceremony, the pastor obliged his request with pride. However, the United Methodist Church does not currently support gay marriage and it is strictly forbidden in their general handbook of instructions formally known as the "Book of Discipline".

Members of his congregation were rankled by his actions and brought up charges against him for performing the marriage. He was found as having violated Church policy and given a 30-day suspension from his pastoral duties. In addition, he was admonished to use his suspension period to reflect on whether he would support the gay marriage prohibition. The jury from his disciplinary council told him that he must voluntarily resign if he cannot support the current Book of Discipline.

“I am actively committing to having those discriminatory laws changed and banished from our Book of Discipline,” Schaefer said. “That’s the only way I can reconcile being a United Methodist at this point.”

However, the pastor remains defiant. He believes he has now become a voice for the lesbian, gay, bisexual, and transgender population (LGBT). He now views it as his mission to stand against a practice he views as being wrong and to push the church to amend its stance in the Book of Discipline and refuses to voluntarily give up his position.

“I cannot voluntarily surrender my credentials because I am a voice now for many — for tens of thousands — of LGBT members in our church,” he said.