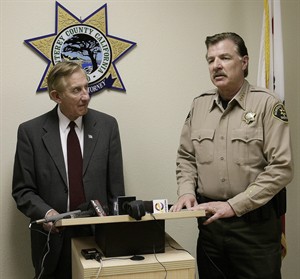 Monterey County District attorney Dean Flippo, left, and Monterey County Sheriff Scott Miller answer questions during a news conference, Tuesday, Feb. 25, 2014, in Salinas, Calif. Flippo said the six officers, including the recently retired police chief and the acting chief, have been arrested, in connection to a scheme to steal more than 200 cars from poor Hispanic people. (AP Photo/The Monterey County Herald, Vern Fisher)
AP PHOTO/THE MONTEREY COUNTY HERALD, VERN FISHER[/caption]King City, California criminal investigators have reacted swiftly after discovering that a number of its police officers were directly involved in a scheme to defraud Spanish-speaking immigrants by impounding their motor vehicles and then demanding heafty fees for their return.

One-third of the police force in the town located in central California were relieved of duty and arrested after officials uncovered a scheme in which the officers targeted low-income Hispanic residents, by impounding and then towing their cars. When the owners could not come up with the cash to pay for towing and impound fees, the impounded cars were sold and the proceeds collected by the police officers themselves or the cars were given free of charge to the police officers involved in the illegal scheme.

The Monterey County District Attorney's office reports that among the officers arrested were the acting police chief as well as the most recent chief of police who had recently retired from active duty. All seven of the officers alleged to have been involved in the scheme to steal cars from members of the Hispanic community are currently on paid administrative leave.

The number of officers involved in the scheme accounts for a third of the 17-member police force in the agricultural community located about two hours south of San Francisco.

The same towing company, owned by the acting police chief's brother, received the contract to tow away more than 200 vehicles, mostly from poverty-stricken Hispanics who could not speak English or did not have the means to hire legal representation to protect their rights when their vehicles were towed away. Four of the officers relieved from active duty are facing charges of embezzlement, bribery or accepting a bribe.

Disgraced police captain Bruce Miller refutes the charges and says his reputation is being deliberately ruined.

Fourth Man Set For Execution: Fourth In Missouri In 4 Months