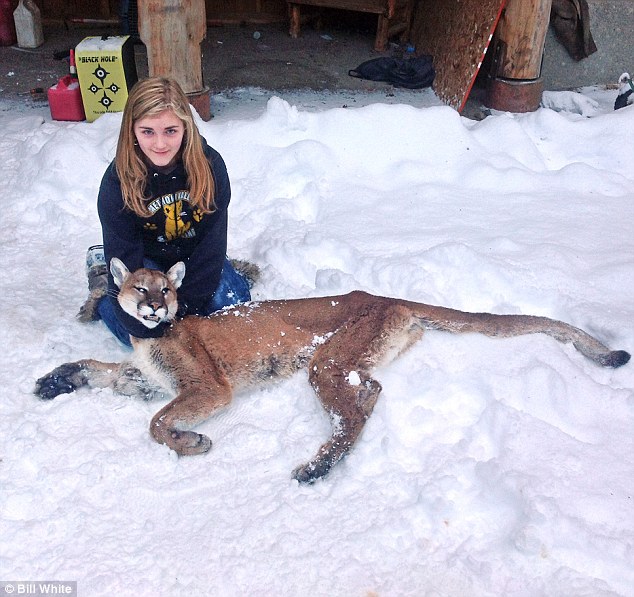 Twisp, Washington - In this remote town of 919 people, Shelby White, age 11, has already bagged three deers in her short hunting career and she even has a license to hunt cougars. It turns out that her license came in real handy this week. Her father spotted a cougar tracking her 14-year-old brother in the woods and dispatched his daughter to take care of the problem. She did. Using her rifle, she dropped the cougar before it could bring any harm to her family.

It turns out this particular cat wasn't that big as it weighed 50 lbs and was reported to be about 4-years-old. That doesn't mean it wasn't dangerous though. Photographs of Shelby by her kill showed it was more than capable of taking a human life. In this remote part of the state, mountain lions are a real threat to both humans and livestock. This winter officials have killed ten cougars. In fact, Shelby's 9-year-old brother shot a 125-lb cougar last month.

She has plenty of experience handling a rifle. She's been using a .234 caliber since she was 8-years-old. Her grandmother confessed that the family has killed four cougars in February. The growing cougar population is the result of ill-conceived legislation that bars the use of hunting dogs to track and kill the mountain lions.

On The Web:
'She wasn't scared a bit': How girl ELEVEN grabbed gun and shot dead cougar that was stalking her brother, 13, outside their house
http://www.dailymail.co.uk/news/article-2568771/Girl-11-shoots-cougar-following-brother-14-home-making-THIRD-mountain-cat-killed-one-week.html

Related Topics:girl 11 shoots cougar
Up Next