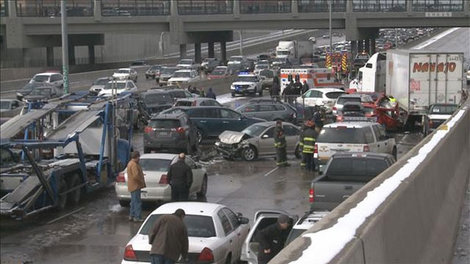 Heavy snow and icy road conditions turned Colorado's Interstate 25 into a driving nightmare for commuters on Saturday morning. More than 100 cars piled up on the highway and the cars kept on slipping and sliding into one another.

The pile-up claimed the life of one woman, and more than 20 injured people were taken to area hospitals. Those injured included adults as well as children. The massive accident took up close to a two-mile stretch of the interstate highway as a band of heavy snow crossed the region. Northbound lanes were closed for several hours as the accidents were cleaned up.

The Department of Transportation is stating that seesawing temperatures in Colorado have led to very slick road conditions. Drivers' were quoted saying, "It looked like people were just trying to slow down, and everyone kept hitting each other" and that "it all happened so fast."

Investigators have not yet stated a cause for the pile-up. Still, several drivers who were caught in the jumble feel as if the whole incident was avoidable. The drivers indicated that people were driving too fast for the road conditions, which ultimately led to 104 cars piled-up on the highway and a horrific chain reaction of cars bouncing off one another.

Those not injured in the pile-up were taken by bus to speak to investigators regarding the accident, while vehicles were towed away. In the meantime, approximately 100 snowplows and four tankers stocked with deicing materials were dispatched to clean the roads throughout the Denver area.