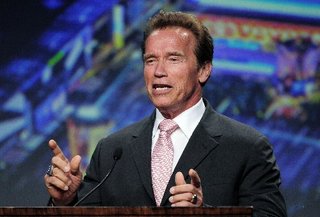 Ex-Governor Arnold Schwarzenegger Sued by Inmates Over Valley Fever
Coalinga, California - Pleasant Valley Prison, the state prison and maximum security facility run near this Central California city of 14,000 people, is said to be infected by the bacteria Coccidioides posadasii or Coccidioides immitis. It is a bacteria that is endemic to the arid desert conditions found in parts of Arizona, Nevada, Utah, New Mexico, Texas, and California. During the dry season, it remains dormant. However, it will manifest itself as stringy ligaments and dangerous mold spores during time of moisture. Those who are exposed to it may develop "Valley fever" which is a painful and potentially fatal illness attacking internal body organs.

Against that backdrop, 20 current inmates at Pleasant Valley Prison have filed a lawsuit against former California Governor Arnold Schwarzenegger and current Governor Jerry Brown for implementing a policy of exposing inmates to the deadly mold spores. They claim dozens of inmates have died painful deaths as a result of the fever which can also cause excruciating skin lesions and brain damage. They are seeking monetary damages so they can hire medical staff to give them the treatment they now require. It is uncertain if either governor can be sued personally for their actions while in office.

On The Web:
Ex-Gov. Arnold Schwarzenegger -- Sued By Prison Inmates -- You Poisoned Us With Valley Fever
http://www.tmz.com/2014/03/07/governor-arnold-schwarzenegger-prison-inmates-lawsuit-valley-fever/

Related Topics:Arnold Schwarzenegger hit with prison lawsuit
Up Next