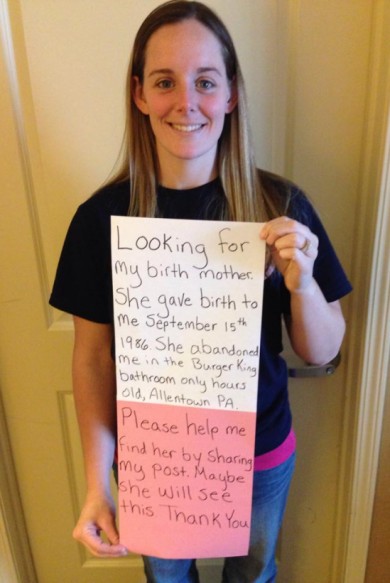 Guests at a Burger King fast food restaurant in Allentown, Pennsylvania, found something totally unexpected in one of the restrooms back in 1986, a newborn abandoned baby girl. That baby is now a 27-year old woman named Katherine Deprill and she is making a plea to social media users to help her find any clues to the identity of her birth mother. Deprill, known as the "Burger King Baby", was only several hours old when she was left on the floor in a restroom stall in the restaurant on September 15, 1986.

“I just hope that I can see her and maybe give her a hug,” she said.

Deprill is now a mother herself, married with three children, and she wants them to know their biological grandmother. So she posted a full-length photo of herself on her Facebook page, holding a handwritten note listing the details of her abandonment and asking social media readers to share her post wherever and whenever possible so that her birth mother might see what has become of her baby and reconnect with Deprill. There are few clues to her mother's identity, although a Burger King employee reported seeing a young woman, sporting frizzy light brown hair, drive away in a blue car around the time the baby was discovered.

Related Topics:Katherine Deprill plea to find mum who dumped her at Burger King
Up Next