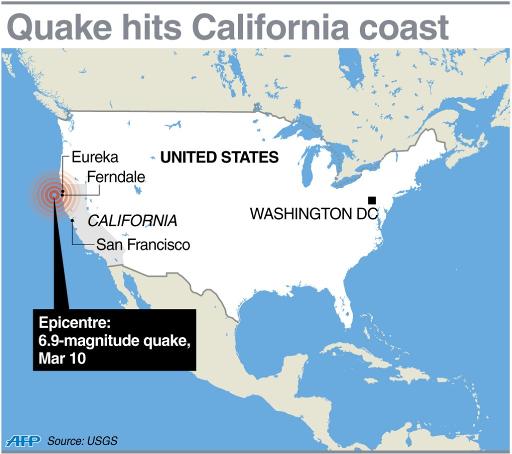 Map of US locating the 6.9-magnitude quake that struck off the coast of California[/caption]California residents living near Eureka who went to bed early Sunday night were shaken awake by a 6.9 magnitude earthquake that struck about 50 miles west of Humboldt County in the northern part of the state.

The U.S. Geological Survey recorded the first temblor at 10:18 p.m., with residents living as far to the south as San Francisco and as far north as the Oregon border reporting feeling seismic activity. Police officials in Eureka have said that they received no reports of any major damage along the North Coast of the Golden State and no injuries have yet to be reported.

Several aftershocks have rocked the area, but officials felt no need to issue any tsunami warning. The last time an earthquake of this size occurred in the area four years ago, the energy was strong enough to damage chimneys, cause power lines and traffic signals to fall down, break windows and cause the evacuation of one apartment complex. 2014 marks the 50th anniversary of an 8.8 magnitude quake centered in Alaska that was strong enough to cause major destruction along California's northern seacoast.

That major quake caused a tsunami to roll in from the Pacific Ocean onto Crescent City, resulting in almost one dozen residents losing their lives.

Several Eureka residents classified Sunday's shaking as a long, slow roll with no loss of electrical power and not strong enough to cause any items to fall off shelves.

There were no immediate reports of damages or injuries.